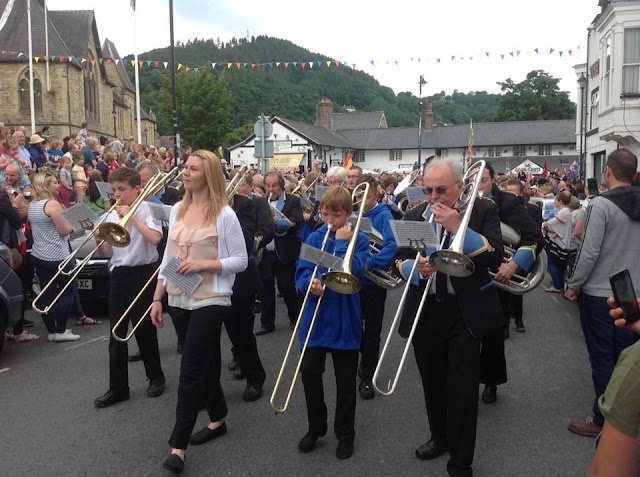 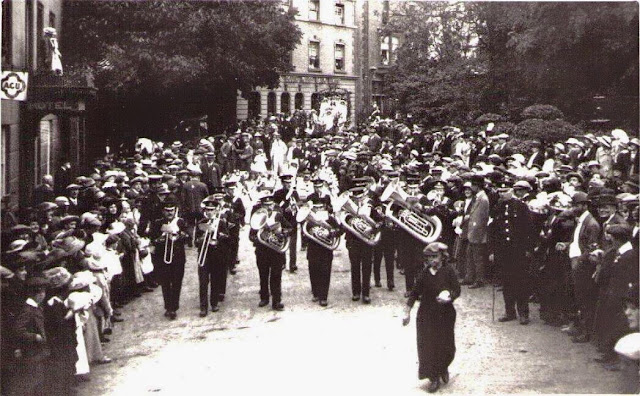 * The band in its earliest days as it passes along Bridge Street near
the Royal Hotel.

Llangollen Silver Band had played without a break since 1904, until the Covid restrictions stopped them in their tracks.

But they’re now up and running again and on the lookout for new blood of any age to help keep them in tune for at least another century.

The band is of an important part of life in the town and involved in all its major events plus many more besides.

Spokesperson Bob Lube, himself a player of many years’ standing, said: “When you join the band you will receive a very warm welcome and the loan of an instrument for as long as you are a member. There are also free music lessons, and a uniform.

“It’s a great hobby and you’ll get lots of enjoyment out of meeting and entertaining a wide range of people. There are at present three former members of the band making a living by playing in military bands.

“We perform mostly in north Wales but we’ve also appeared in the neighbouring areas of England such as Cheshire and Shropshire.”

Bob added: “We have three sections – the senior band, which currently comprises about 15 accomplished players, the youth band of about four members and five members in the training band.

“As with a lot of other groups, we have young people joining us as children and then when they grow up they often move away to go to university and things like that.

“So it would be good if we are able to recruit more potential players aged eight and over to fill the gaps this creates. It will give them a great skill they can take with them for the rest of their lives.”

Regular practice sessions for the seniors are held on Mondays from 7-8.30pm in the Band Room in Parade Street, which underwent a £100,000 refurbishment in 2012 thanks to outside grants and the band’s own fundraising.

But, as Bob explained, it’s not just youngsters needed.

“We’re also after more mature players. These might be people who have played an instrument when they were younger, given it up but now want to get back into it.

“Our motto is that music at the heart of the community. We have a proud record of playing in and around Llangollen for over 110 years and want to keep going for another century.”

Posted by llanblogger at 7:20 AM