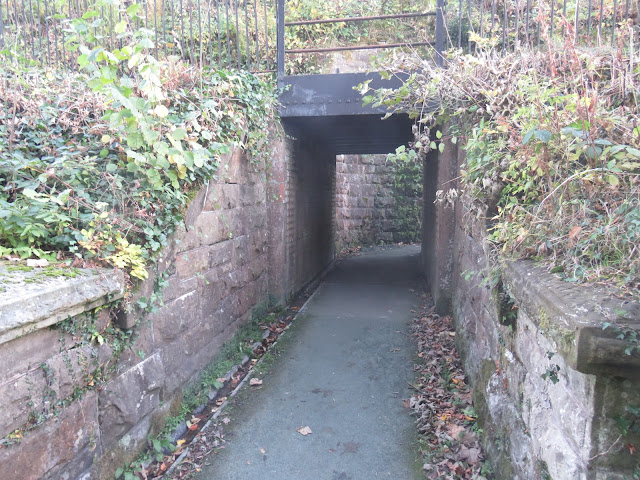 * The underpass near Berwyn station. 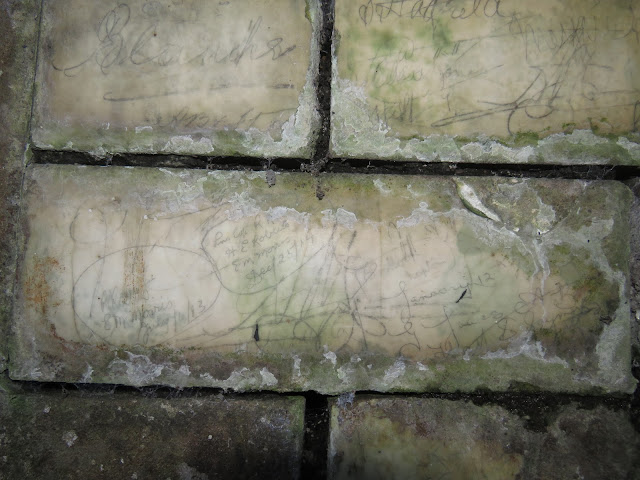 * Some of the soldiers' graffiti on the brickwork.

To mark this annual time of Remembrance llanblogger has a special feature on the historical World War One soldiers' graffiti found near Berwyn station, for which concern has been expressed

A man who recently visited Berwyn station and saw the poignant World War One soldiers’ graffiti on the underpass there has voiced concerns about its deterioration.

As they waited for trains on their way to fight in the trenches a series of young squaddies inscribed their thoughts on the white glazed brickwork of the underground passage which leads down from the station platform towards the Chain Bridge.

A number of these young men never returned home from the killing fields of France and Belgium.

What remained of the pencilled markings were officially recognised many years later, in the early 2000s, when they became the subject of media attention and a special exhibition at Llangollen Museum.

Although a major programme of renovation and protection was thought to be necessary it is understood that the high cost of such an exercise meant it was never undertaken.

Now an email from a concerned visitor has revived interest in the historical graffiti.

John Linley, of Treuddyn, wrote to llanblogger: “I was in Llan yesterday and took a friend to see the underpass and was shocked and disappointed to see how bad the deterioration was on the writings there.

“I first visited the site way back in the late 90s.

“It put tears in my eyes to read the writings including one dated Christmas Day by one of the soldiers waiting for a train.

“The chain bridge was closed then with all the planks missing. I scrambled over the bridge to the hotel.

“Then I read that Stephanie Booth had bought the hotel and promised to repair the chain bridge. I was alarmed that it put the writings in danger of further damage due to people then defacing the writings.

“I alerted the council and the Great War records people and I believe photos were taken.

“I have a suggestion that could help: Chase out a line of mortar above the writings and insert a length of angled plastic to take the water away and drip clear of the wall.

“Then pick a single brick to clean just with water and a soft cloth, to see if the writing can be made clearer after all the moss removed.

“If successful, then carefully clean the rest of the bricks & spray with a clear lacquer.”

In 2018 Peter Dickinson, one of the founding members of the railway's Heritage Group and an active volunteer at Berwyn station from 2012 until 2018, gave a fascinating insight to llanblogger into the on-going efforts to preserve the graffiti.

Now, shown the email from Mr Linley, he said no major conservation work of the graffiti had taken place.

And he added: “Without the improvements to the drainage and new membrane being installed over the structure, I believe that it would be counter-productive to undertake any conservation work on the graffiti.

“The efforts to carefully uncover and record the individual messages would be soon undone by the continuous flow of water over the surface of the white-glazed bricks.

“A two-stage approach is needed and the stumbling block has been the lack of funding for this project from the railway's previous management.

“I am very keen to be involved with this project going forwards, especially given the poignancy and national importance of the structure.

“For some unfortunate souls, the last thing the soldiers did on Welsh soil was to sign the bricks before boarding trains bound towards the Front and destined to make the ultimate sacrifice. The very least we should do is preserve their memory for future generations.”

During the mid-2000s the pencil messages were first spotted by David Gepp, a lecturer in photography at the Herefordshire College of Art.

His discovery led to him arranging a temporary exhibition on the signatures in Llangollen Museum in 2007.

Volunteers at the museum began researching some of the messages.

One of these is by AJ Candy which reads "I really want --is baby".

One entry on the walls shows that E. M. Morris and R. Roberts shared a cigarette together there on 6th July 1913.

Some of the other scribblings indicated soldiers in light-hearted mood, including the messages 'Balls from Belgium', 'Berlin Last Stop' and 'Hoof Hearted'.

Research into Candy’s life and military career has revealed that he is incorrectly listed on the Llangollen war memorial and was actually named Albert rather than Alfred.

It transpires that Albert James Candy was born in Cardiff in July 1887. His father died when Albert was only three and tragically his mother died in May 1895.

Albert and his older brother Frederick were soon admitted into an orphanage in Somerset, where the trail temporarily goes cold. However by 1911, he had found work at a bakers and confectioners’ shop in Llangollen.

There is currently no record of when he joined up, but from the Commonwealth War Graves we have found that on 17th April 1917 James Candy 675653, Royal Field Artillery, “D” Battery, 285 Brigade was killed.

At the time of WW1 commemorations efforts were made to increase public awareness of the graffiti through free information packs and temporary displays at the station, including the display of commemorative wreaths and even a GWR WW1 stretcher.

* Llangollen Railway's new Visitor Guide, which is being released in February, will feature an article about the significance / history of the subway. https://www.mortonsbooks.co.uk/product/view/productCode/15044