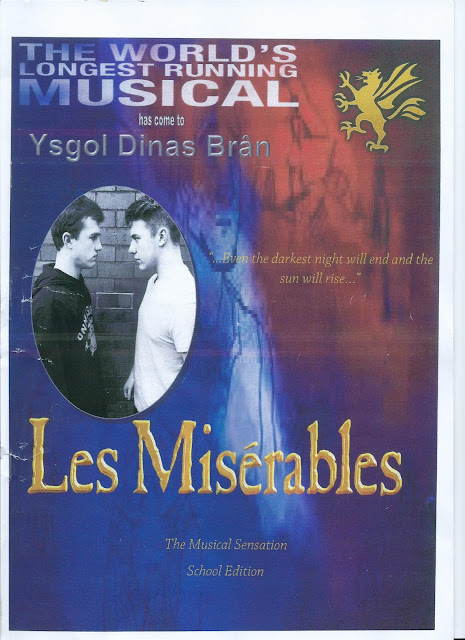 Ysgol Dinas Bran brought a touch of West End magic to Llangollen with its breathtaking production of Les Miserables over four evenings this week.
Lining up behind the barricades for the school edition of the world’s longest running musical was a bevy of revolutionary young talent whose stage mastery brought a packed closing night audience to its feet in salute (Friday).
The lead performers and enormous chorus line wrung every ounce of emotion from this stage classic which tells the heart-rending tale of former convict Jean Valjean’s gritty progress through a deeply troubled post-Waterloo France.
Along the way he meets and changes the lives of a host of people from the adorable to the wicked.
Joe Bell played the hero with sympathy and great feeling, bringing into play a commanding stage presence augmented by a wonderful singing voice.
His arch-rival the former prison guard turned policeman Javert was portrayed with great style by Barra Liddy. You could feel the malevolence whenever he strode into view – and where did he get the Terfel-like bass baritone at such a tender age?
Fantine, the young factory worker Valjean takes under his wing but who eventually meets a tragic end, is such a meaty role that it was shared to perfection by Millie and Celyn Orton Jones.
Also role-sharing beautifully when it came to portraying Fantine’s secret daughter Cosette were Lauren Macfarlane and Maia Molloy.

Lewis Gibbins made a fantastic Marius, the student who gets caught up in the political upheaval of the 1832 Paris Rebellion, falls in love with Cosette and whose life is saved by Valjean. He looked and sounded every inch the hero.
There aren’t too many lighter moments in this Victor Hugo novel-based weepy but those that are come courtesy of the aptly-named Michael Talent as shifty innkeeper Thernardier and Mae Morgan as his gruesome missus. Both brought a large measure of comedy feeling to their roles.
Beth Rowley was nothing short of brilliant as their daughter Eponine whose painful but unreturned love for Marius is brought to an abrupt end by a bullet at the barricades.
Costumes and stage settings that are as powerfully interpretive and colourful as the large cast were created by a small behind-the-scenes army and the 17-strong orchestra provided the driving force and momentum for the production.
That Friday standing ovation by an awe-struck audience said it all about Dinas Bran’s Les Mis.
Posted by llanblogger at 9:13 AM