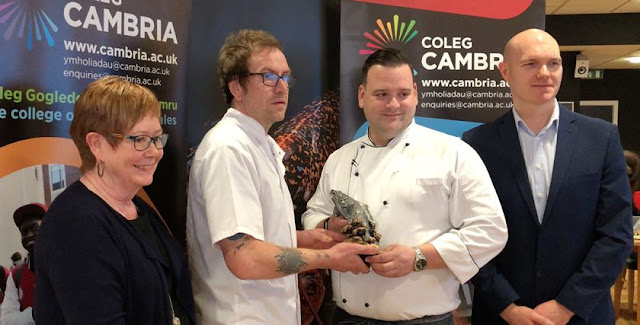 Three of the top eateries in North East Wales went head to head in the grand final of the Year of the Sea Food challenge – with Gales of Llangollen being crowned the overall winner.

Over the past month 12 eateries across Wrexham, Flintshire and Denbighshire have put their best fin forward to showcase the best of local produce and hit the rather tricky ‘Year of the Sea’ brief.

The challenge took inspiration from the 2018 Welsh ‘Year of the Sea’, with the North East Wales Tourism and Marketing team inviting local eateries to create a dish that would celebrate the region’s amazing coastline, epic inland waterways and great local produce.

Each restaurant has been visited by a mystery diner, including food bloggers from South Wales, local press (such as Wrexham.com) and food writers, who had the very difficult task of tasting and scoring the dishes.

While Year of the Sea may seem a difficult challenge for a semi landlocked North East Wales, all the participating rose the challenge and offered their interpretations of the classic fish and chips with a twist or their surf and turf dishes.

Friday saw the three finalists – The Fat Boar Wrexham, Gales of Llangollen and the Royal Oak in Bangor on Dee – compete against each other in a live cook off at Hafod in Coleg Cambria.

Speaking yesterday Joe Bickerton, Destination Manager at Wrexham Council, said the standard of competition this year had been excellent – with all three finalists scoring a whopping 59/60 in the mystery diner feedback.

First up was The Royal Oak, with their ‘Surf & Slurp’ – a dish billed as a ‘winter hearty dish that will warm you up from the inside’.

Providing a background on the dish, Lee Williams, general manager of the restaurant, explained it was made of locally sourced pork from Lewis’ farm shop and Menai Mussels which were freshly delivered.

The competition entry was also described as being a hit with customers, with between 60-70 dishes being served over the past month, all of which receiving positive. feedback.

Next up was Gales of Llangollen, who also offered their unique twist on surf and turf with sous vide Pen y Lan pork belly, saffron mash, American sauce, a smiling langoustine and a couple of lovely quails eggs.

After a lot of deliberation from the Judges, Gales of Llangollen was crowned the winner of the Year of the Sea Food Challenge – with judges describing their dish as having a ‘good use of local produce’ and the ‘visual wow factor’ – a vote that matched the verdict in room.

In what was a tough competition, the Fat Boar came in second and The Royal Oak third.