This year's Fringe Festival will go ahead ... but later

This year’s Llangollen Fringe will go ahead despite the pandemic.

In its latest briefing email the popular annual festival of music and arts says the show will go on later in the year, from September 10-18, and will be a mixture of online entertainment and live shows.

The Fringe team says: “While the Covid crisis seems to be easing there is still understandable uncertainty about what lies ahead and what it will be possible to do entertainment-wise.

“We have our fingers on the pulse, so rest assured we will bring you the very best that is possible.

“Hopefully, we will be able to put on a hybrid of online entertainment and some shows - in the Town Hall and elsewhere - where some size of actual live audience is allowed.”

They add: “One of British music's emerging one-off geniuses, Baxter Dury, was scheduled to play the 2020 Fringe. He is still very keen to play for us and we are hoping that something might be arranged for Saturday July 31. A Fringe Taster if you like!

“There is no certainty obviously, but again watch this space and we'll keep you updated. A taste of what we might be getting is here - Baxter Dury.”

Looking ahead to next year’s festival, the team says: “Fringe 22 will be a year of celebration because the Fringe will be 25.

“The hotly anticipated appearance in Llangollen of Warmduscher has twice been thwarted by the virus.

“Not to be beaten, we already have them in our 2022 schedule for a taste of their 'braggadocious brand of transatlantic street surrealism' and the 'anarchic bar brawl of their live incarnation'.

“While we're always wanting to look to the future, it's good to look back from time to time as well and the 25th Fringe seems an appropriate time to do that.

“So, any of you with Fringe memorabilia or special memories from the 25 years, we'd love to hear from you.  Please drop an email to Chris@llangollenfringe.co.uk

Posted by llanblogger at 6:33 AM No comments:

Posted by llanblogger at 6:32 AM No comments: 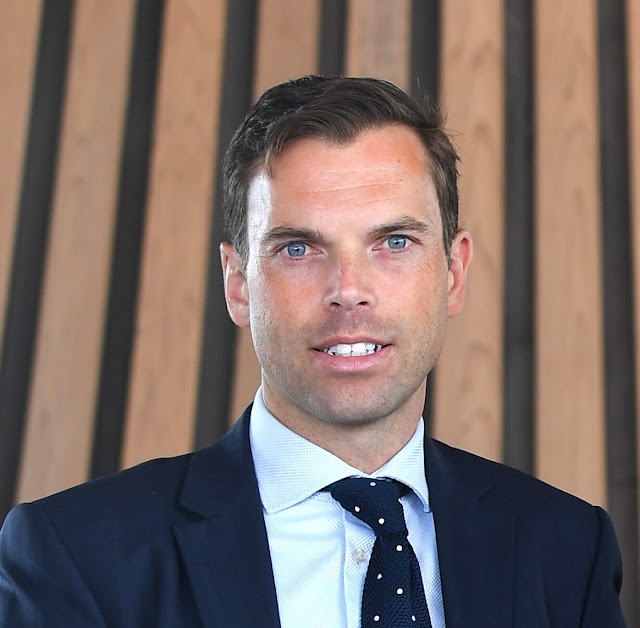 The Minister for the Economy and Transport polled 10,448 votes compared to the 7,535 recorded by his Welsh Conservative opponent Barbara Hughes.

Posted by llanblogger at 5:34 PM No comments:

Llangollen Health Centre has put out this urgent vaccination message: 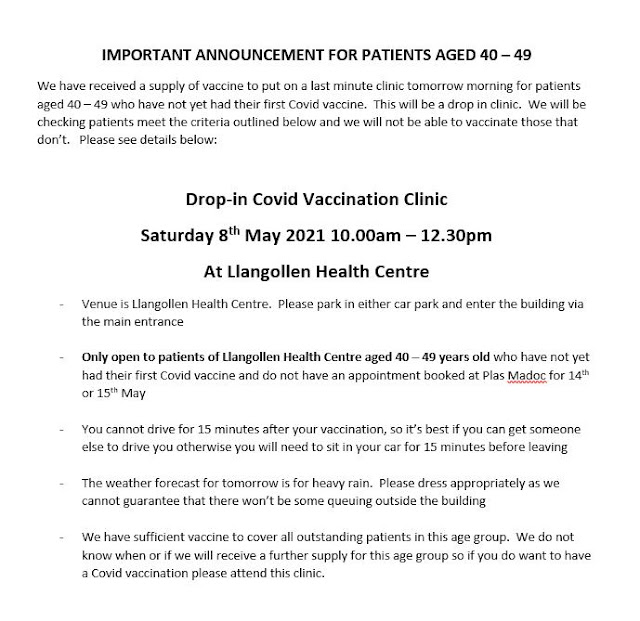 Posted by llanblogger at 10:30 AM No comments: 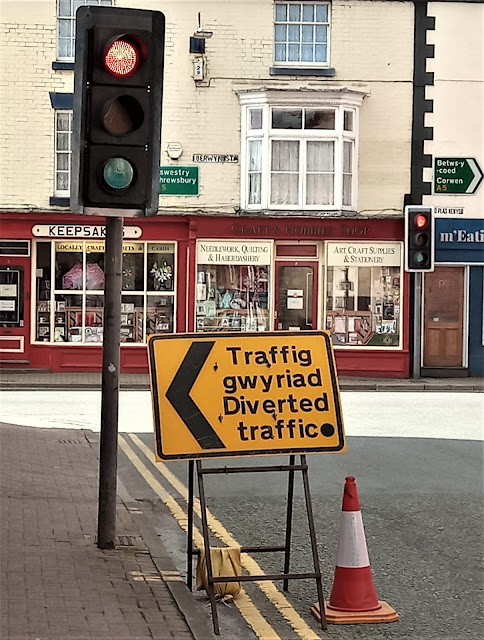 * One of the diversion signs, at the lights on Castle Street.

One of Llangollen’s county councillors has revealed the assurances he sought from highways chiefs to prevent a major diversion through the town causing traffic chaos.

Two overnight closures of the A483 in both directions between the Chirk and Halton roundabouts from Thursday-Saturday, from 8pm until 6am, to allow essential repairs to the viaduct has led to traffic being diverted though Llangollen.

On the first night, last night, traffic was extremely heavy on the A5 and along Castle Street leading to complaints from residents.

Asked by llanblogger for his reaction to this, County Councillor Melvyn Mile revealed the contents of his email exchanges in advance of the works with national and local highways officials.

Writing first to the North & Mid-Wales Trunk Road Agency (NMWTRA), which is in charge of the operation, he said: “I’d like to point out that the last time the A483 was closed due to high winds, it caused total chaos in Llangollen.

“Presently we have temporary traffic lights on the A5 controlling an excavation just inside the town’s easterly limit, together with temporary lights on the main A5/Castle Street junction.

“You claim that the situation will be monitored, I hope that means men on the ground (Amberon or someone similar) ready to enforce a One-Way system if needs be from the Llangollen Health Centre to the east on the A539 to the old Ty’n y Wern hotel to the east on the A5. A loop of approximately 1 mile.

“The A539 is too narrow to allow two HGV’s to pass each other 100 metres to the east of Dee bridge in Llangollen. It caused much frustration and shows of bad temper at the previous closure.

“Two HGV’s using Castle St together means that the one heading north will have to mount the kerb.

“I appreciate that it’s being done overnight but there is still considerable traffic involved. You may think that I’m scaremongering but I saw the result of the last closure and believe me, I’m not.”

Replying to his concerns, Nia Louise Lennox of the NMWTRA said: “We are very aware of the traffic disruption that was caused when the two viaducts were recently closed due to strong winds.

“The works for each of the two overnight consecutive closures have been planned to ensure that the A483 can be re-opened to traffic before traffic volumes significantly increase in the early morning.

“It is expected that that A483 will be re-opened by 04.00 however a contingency of 2 hours has been allowed for to ensure the road is open by 06.00 as advertised. Over-night traffic volumes are much lower than daytime and morning peak traffic volumes.

“The traffic management sub-contractor will be patrolling the diversion route throughout the period of the closure and will be ready to take action to alleviate any disruption that occurs under the direction of NMWTRA personnel who will be in attendance on site.

“The Viaduct is a vital piece of infrastructure. The integrity of the top slab supporting the carriageway has recently been compromised and urgent repairs are needed to prevent the void within the structure being flooded with surface water. The damaging effects of water penetration are accumulative and must be addressed as soon as possible and before the Trunk Road Summer embargo periods, hence the short notice period.”

And from Tony Ward, Denbighshire County Council;s Head of Highways, Facilities and Environmental Services, Cllr Mile received the message: “Having reviewed the narrow section of road east of the Ponsonby Arms on Street view we have decided to erect temporary traffic lights whilst the diversion is in place.

“We feel it’s a marginal decision given the expected light HGV flow over night but the down side risk created by erecting signals is small and is easily justified.

“We have also asked the TM contractor/designer to drive the route tomorrow morning to check the latest situation and to advise/discuss with us any other possible current and arising issues that we may be able to provide mitigation for.”

Cllr Mile told llanblogger: “I did everything I could to ensure traffic congestion caused by the roadworks would be minimised.”

Posted by llanblogger at 10:26 AM No comments: 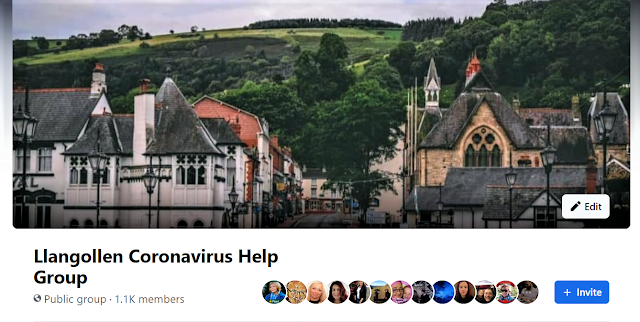 Llangollen Coronavirus Help Group, which has helped mobilise the town’s community spirit since the earliest days of the pandemic, has suspended its popular Facebook page.

But the two town councillors who have been helping to run the group since last October, say the good work will continue in the background.

The page has just over 1,000 members and attracted hundreds of hits a day as it posted up-to-date information on the Covid-19 situation and co-ordinated the efforts of an army of volunteers to help with such things as the delivery of food, prescriptions and newspapers to those self isolating.

Now the woman who started the page and the group whose name it bears has taken to social media to explain why she is placing the page in suspension.

Cat Meade, who juggled her full-time job at Wingetts estate agents while running the group with dedicated volunteers, says: “As we are slowly progressing forward we have agreed to suspend this page, I am hoping this will be my last post to you all, it will stay just in case, however be inactive.

“The past 14 or so months have tried and tested us all, as individuals, families, businesses and the loss some have suffered. The overwhelming support Llangollen has benefited from its residents is outstanding, and I hope not to be forgotten.

“An army of volunteers, businesses accommodating to home deliveries, services as and when needed, and the great team of admins on here to keep you all posted on developments. Far too many to mention as the post would need 6 pages to list all.

“I personally would like to thank EVERY ONE of you for volunteering, supporting, to all those local businesses that have gone above and beyond in their commitment to our community.

“I (and am sure the rest of you will agree) had no idea what length of support would be needed from March last year! We got through it together, as a community, looking out for one another.

“There are still areas in need, Foodshare and the community I and others are still assisting with food and hot cooked meals, a big thank you to the Llangollen Inner Wheel ladies who are supporting weekly and if you can please assist with items to Llangollen Food Share which will be an ongoing service.

“Again, thank you to you all, you are all amazing.”

Cllr Cheminais said: “Our main contact is usually by phone. The majority of residents we’ve helped in the past now seem to have the support of neighbours, friends, relatives.

“John Palmer and I continue to maintain a data base of volunteers prepared to help others.

“We’ve largely wound down but have kept our list of volunteers and are still getting very occasional requests for help, usually shopping. The Rotary through Sheena Burrell are still collecting and delivering prescriptions.

“We will continue to be here if anyone who asks but as people are returning to work etc our group of volunteers is likely to shrink.

“In an  emergency we can help people with shopping and can arrange for regular contact for those who live alone or just need someone to talk to.”

Posted by llanblogger at 6:40 AM No comments: