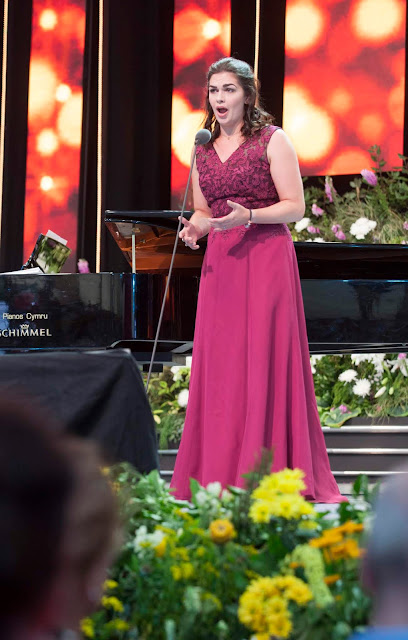 A supply teacher who taught in Llangollen came within a whisker of winning one of the main prizes at an international festival even though it was her first ever solo competition.

Soprano Rachel Marsh, 24, (pictured) was a runner up in Pendine International Voice of the Future at the Llangollen International Musical Eisteddfod.

She revealed that she used to dream of winning the prestigious title when driving past the Eisteddfod field on her way to work at the town’s Ysgol Bryn Collen.

Although she has been singing in choirs ever since she was in school, the only recently started taking lessons to become a soloist.

In the event Charlotte Hoather, 24, from Winsford in Cheshire was crowned the winner and was presented with the brand new Pendine Trophy, a solid silver salver, and a cheque for £5,000 by Mario Kreft MBE, proprietor of the arts loving sponsor, the Pendine Park care organisation.

Rachel, from Wrexham, and fellow runner up, tenor Mark Christian Bautista, 26, of Calamba, in the Philippines each presented £2,500 cheques.

The international competition attracted a record number of 43 hopefuls try to impress judges at a preliminary competition, with the three finalists making it onto the main Llangollen pavilion stage for contest.

Mr Kreft and his wife, Gill, pledged to contribute £5,000 to the International Voice of the Future competition through their Pendine Arts and Community Trust (PACT) which supports cultural and community initiatives, with a further £3,000 coming from the Sir Bryn Terfel Foundation and £2,000 from the Eisteddfod.

Rachel was thrilled she had done so well in her first ever solo competition which attracted the finest young singers from across the world.

She said: “I have been singing in choirs as long as I can remember and then began solo lessons with Anne Williams King of North Wales Opera. I studied linguistics at the University of Manchester and then did a primary school teaching course.

“I have been a supply teacher for the past few years and spent a year teaching at Ysgol Bryn Collen in Llangollen. I used to pass the pavilion and dream of winning the Pendine Voice of the Future title.

“I have performed at Llangollen before but in a choir competition.”

She added: “The preliminary round was hard but the final was nerve wracking. To be honest it was my first competition and I’ll be back. I thought Charlotte was amazing and, in truth, she really nailed it and deserved to win.”

Still pinching herself in disbelief, a thrilled Charlotte Hoather said she would be using the prize money to further her career.

She said: “I just want to sing opera; it’s all I’ve ever wanted to do. My dad went to school in Wales and my granddad had a B&B in Llandudno so we used to visit Llangollen quite a lot.

“I entered the same competition as few years ago at Llangollen and came third, that was in 2012. But the prize money now is amazing and will help me pay for more lessons and to go to auditions in other countries.

“It’s life changing and gives me the security I needed. It’s about building a career now and I need to produce some videos to send out through the Young Artist programme to international opera companies.”

Charlotte studied for two years at the Royal Northern College of Music in Manchester before moving to the Royal Conservatoire of Scotland where she completed her undergraduate studies and has now just finished a master’s degree at London’s Royal; College of Music.

She said: “The preliminary competition was tough and the standard was incredibly high. I have made real friends with Rachel and Mark. The atmosphere has been lovely and to win has just been amazing.”

Mr Kreft said: “I believe we have seen a star born this evening as Charlotte Hoather’s performance was simply breath-taking and spectacularly talented. However, Rachel Marsh and Mark Christian Bautista also put in stunning performances too.

“The fact that Rachel performed so brilliantly in her first ever solo competition is a brilliant achievement that almost defies belief. She will go far.


“Our aim in supporting the competition in conjunction with Sir Bryn Terfel is to provide a springboard for brilliant young singers from around the world to achieve their dreams of establishing a career on the global stage.

“The competition chimes perfectly with our ethos at Pendine Park because the arts in general and music in particular provide the golden thread running through everything we do to enrich the lives of our residents and staff alike.”

“I hope the recognition Charlotte and the other two finalists will deservedly get after this competition will help them in their chosen careers and we see all three fulfil their ambitions of becoming major opera stars.”

He added: “Gill and I are also delighted that from this year there is a new Pendine trophy to go with the competition. The new engraved silver trophy will remain at Llangollen and will be engraved with the name of the annual winner on the reverse.

“The trophy, which is solid Edwardian silver bearing a Chester hallmark, has been kindly donated by Chester jewellers Tony and Julie Kaye of Kaye’s Jewellers. It’s a stunning and beautiful trophy.”

All three finalists, according to the festival’s music director, Vicky Yannoula, were amazing.
She said: “The standard of performance we witnessed from all three finalists was exceptional. Their personalities really came out and they are very serious about what they do and where they want their careers to go.

“Singing in a competition such as the Pendine International Voice of the Future competition isn’t just about standing in front of a piano and singing, it’s about a performance. And that what each gave the adjudicators and audience.

“We are indebted to Mario and Gill Kreft, the Bryn Terfel Foundation and the Eisteddfod for giving us something memorable, something very special. We have witnessed the birth of three new opera careers.” 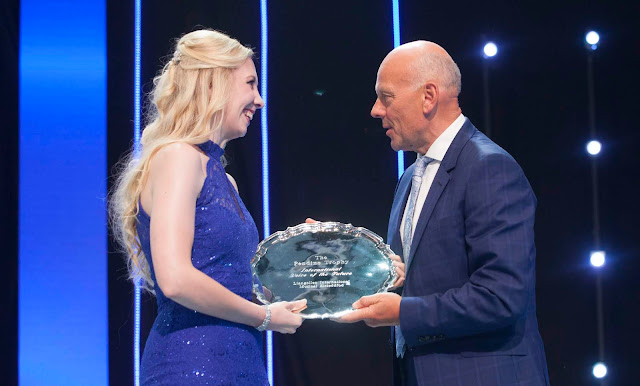 * Winner Charlotte Hoather from Winsford in Cheshire
is presented with the Pendine award from Pendine's Mario Kreft
Posted by llanblogger at 4:36 PM