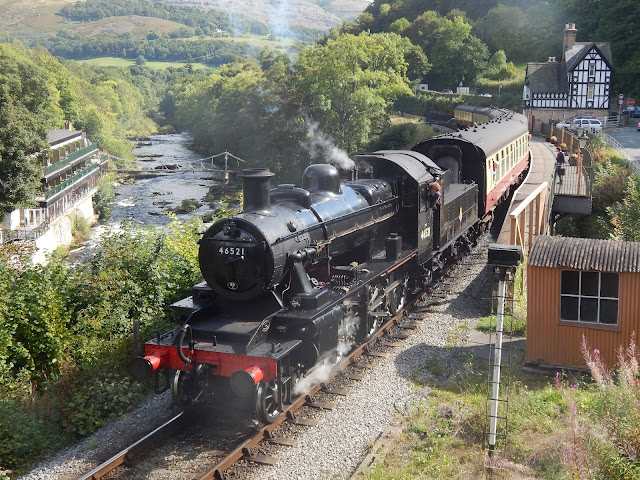 * Steam engine No. 46521 during a previous visit to Llangollen Railway.

The important role played by the old Ruabon to Barmouth line in connecting holidaymakers from the North West of England with the Cambrian Coast will be celebrated at Llangollen Railway this October.

2018 is Visit Wales' Year of the Sea (www.visitwales.com/sea) with the theme for October- December being Connected Coasts.

At its forthcoming Autumn Steam Gala, which runs throughout the weekend of October 12-14, Llangollen Railway is marking the occasion by saluting the part played by the Ruabon-Barmouth route – of which the 10-mile heritage line was once a part - in linking the busy industrial areas of Cheshire, Manchester and Liverpool with the holiday resorts of North Wales .

The gala is entitled Along Cambrian Lines 2 and follows on from the railway’s highly popular event on the same theme in April 2016.

Organiser Peter Dickinson, a project engineer at the railway, said: “It will be a three-day feast of steam-hauled nostalgia.

“Our annual Autumn Steam Gala has become an important event on many enthusiasts’ calendars as it offers a varied range of trains running along our picturesque line.

“For nearly 100 years, the railway carried many thousands of holidaymakers over its tracks to seaside resorts right along the coast.

“This October’s gala will be a celebration of these much loved trains heading for the seaside during the 1950s and early 1960s.

“A great line-up of visiting locomotives will be supported by members of the Llangollen Railway's home fleet, recreating many of the authentic sights and sounds of the period.”

Visiting locomotives include BR Ivatt 2MT  No. 46521, courtesy of the Great Central Railway. This former Royal Train engine spent almost its entire working life in Wales and was allocated to Oswestry, Brecon and Machynlleth steam sheds during its career.

No. 46521 was also a regular sight around Barmouth during the 1950s and 1960s, working trains along the Cambrian Coast route and the regular shuttle service up the Mawddach Estuary to Dolgellau.

Other visitors will be announced over the coming weeks, including the possible return of a local locomotive after a 60-year absence.

Attractions include:
Along the Llangollen line there are a number of interesting structures built with local stone which was quarried along the River Dee.
A special exhibition telling the story of some of the viaducts, road bridges and station buildings will be running in the Henry Robertson Suite in Llangollen Station throughout the gala.
Passenger timetables will follow in the weeks leading up to the event.

The full working timetable will be available free of charge to holders of travel tickets for the event from the railway’s booking offices at the event while stocks last.

* Event details can be found at: http://llangollen-railway.co.uk/event/autumn-steam-gala-12th-14th-october/
Posted by llanblogger at 6:51 AM