Up to 10,000 people are expected to visit LlanBikeFest 2018 –  the Llangollen Motorcycle Festival – at the town’s Royal International Pavilion on August 4 and 5.

Special guest and TT legend John McGuinness said. “I will definitely be at LlanBikeFest. It’s a weekend of fun and a great family affair.” 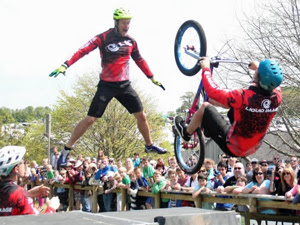 LlanBikeFest director John Hutchinson said: “We had 7,000 visitors last year and all the signs are that there will be thousands more in 2018.

"We are Wales’s biggest festival that celebrates everything people love about bikes – a great weekend for families as well as bike enthusiasts, with free entry for accompanied children aged 16 and under.

“There’s lots to see and do -  hundreds of motorcycles of every type on show, spectacular riding displays, birds of prey, rides and children’s entertainments, plus a great line-up of bands both days.

"One of the biggest attractions for bikers is that we are set amongst some of the best biking roads in Britain – and Llangollen is a lovely, biker-friendly town. We’ll also be raising lots of money for Wales Air Ambulance.”

It will be opened officially by Llangollen Mayor John Haddy and Town Crier Chem Cheminais at 11.00am. Sunday, 9.00am to 5.00pm, with awards for exhibitors’ bikes presented by John McGiuinness in the afternoon.
Posted by llanblogger at 6:45 AM