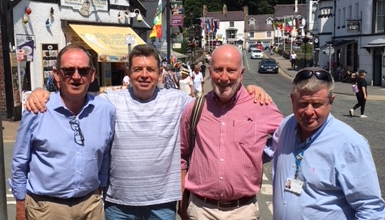 * County Councillors Melvyn Mile, Tony Thomas, Graham Timms and Brian Jones in Castle Street.
At the invitation of Llangollen county councillors Graham Timms and Melvyn Mile two Denbighshire Cabinet Members visited the town to meet with the Llangollen 2020 working group.
The aim was to find out about the plans to develop the town centre.
The group aims to improve the centre of Llangollen, making it more pedestrian friendly for visitors and residents. They are also looking at improvements to traffic flow and parking.
According to Cllr Timms, the project has recently received a promise of £500,000 from Denbighshire which it is hoped will encourage other organisations to support the scheme which he says early estimates suggest will cost between £2-3 million.
Both cabinet members who visited are Conservative councillors for Rhyl, Cllr Brian Jones (Cabinet Member for Highways, Planning and Sustainable Travel) and Cllr Tony Thomas (Cabinet Member for Housing, Regulation and the Environment).

They spoke with the group for over an hour, discussing progress and other ideas to raise the money needed.

Further meetings with other organisations are planned to continue to raise the profile of the group and to gain support for the town.
Cllr Timms said: "Both cabinet members were impressed by the determination of the group to bring about changes that will make the centre of Llangollen become a more vibrant place in the Dee Valley and the heart of the AONB.
“The next few weeks will see a really important consultation taking place where everyone is invited to discuss the problems and possible solutions to Llangollen’s Castle Street.

"We need comments and ideas from all section of Llangollen's community. It's important to also include the opinions of visitors too.”
Cllr Mile added: “The feasibility study team will be carrying out traffic flow surveys over next weekend to enable them to understand some of the difficulties we have. They will be using the results to develop suggestions as to how the town can work better.”
* Cllr Timms said  a public consultation will be in Llangollen Town Hall on Tuesday July 17, from 3-7pm. Arcadis (Consultations) Group are carrying out the survey and everyone is invited to meet them to contribute their thoughts and ideas, he added.
Posted by llanblogger at 7:01 AM