Railway is back on TV this week

The concluding episode of the Great Rail Restorations series with presenter Peter Snow will feature scenes from a major filming event which took place at Llangollen Railway.

The final episode  due for screening on Saturday (not Wednesday as originally advertised, due to World Cup coverage) will not only showcase all four of the wonderful carriage restorations as featured in the series but also Llangollen Railway and its setting in the beautiful Dee Valley.

Llangollen Railway Business Manager, Liz McGuinness said: “We were fortunate enough to be chosen to host the final episode last autumn when the four carriages were brought together at Llangollen and coupled up to produce the fabulous, complete restoration train. 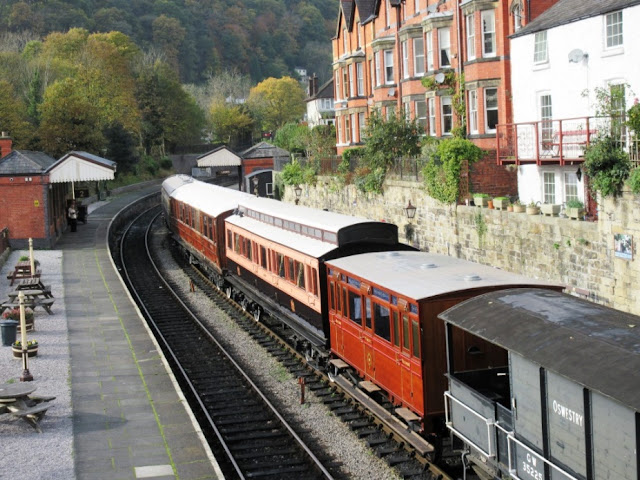 “The unusual sight of four vintage carriages spanning the railway ages from the 1860s to 1960 was seen briefly in Llangollen station. The train featured the four-wheeled coach from the Isle of Wight, the London South West Royal saloon for Queen Victoria from the Embsay & Bolton Abbey Railway, our own Great Northern Saloon and the Pullman coach Eagle from Tyseley Locomotive Works.

“The assembled train made three trips through the Dee Valley for the filming when the Llangollen Railway’s Standard Tank locomotive No.80072 was driven in part by Peter Snow.

"The autumnal filming produced some magical scenes and seeing all four restored carriages, together with their restoration teams, was amazing. It makes a magnificent climax to a very successful TV series which has highlighted the extra ordinary efforts put into restoring wrecks to their former glories.

“Rail fans and members of Llangollen Railway are very excited about the final episode and look forward to seeing the train in action on the Dee Valley line. The final episode is a great promotional feature for North East Wales and can be seen on Channel 4 on Saturday July 7 at 7pm.”

Llangollen Railway’s restored Great Northern composite First/Third class saloon coach as designed by Sir Nigel Gresley is now stabled at Carrog station and will be open for viewings shortly.
Posted by llanblogger at 6:45 AM