What it was like to do the Big Sing Along 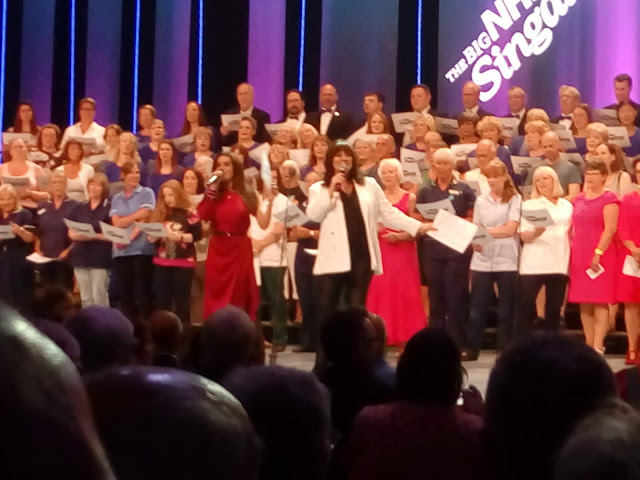 * Coleen Nolan and Amber Davies lead the sing along from the Eisteddfod stage.
It was like performing in a massive karaoke session.
There I was with probably thousands of other people belting out the famous Beatles number With a Little Help From My Friends at the top of my voice.


And, unlike a normal karaoke session, I was doing it on live TV with the famous telly star Coleen Nolan as conductor.
I’d signed for free tickets up to take part in something called the Big Sing Along in which thousands of people at various locations across the UK - and also in Paris for some odd reason – were last night bidding to break the record for the largest number of individuals singing the same song at once.


And the reason for this crazy challenge was to celebrate the 70th anniversary of the National Health Service.
Venues for the sing along included our own Llan Eisteddfod where the attempt was slotted in at the end of the Classical Collection evening concert.


When that excellent piece of professional entertainment finished around 9.40pm every audience member by pre-arrangement had been asked to stay behind to perform something perhaps a little less polished.
As we filed into the big tent before the concert began we were carefully counted by stewards and, before the challenge started, counted again to account for any “deserters”.


The tally was necessary to determine exactly how many people would be taking part as numbers singing would be crucial to whether or not we had set the record.
It was a pleasant surprise as we all sat there in expectation to hear it announced that Loose Women’s Coleen Nolan and Amber Davies, one of the contestants from Love Island, would be coming on stage to lead the attempt.


Joining them on stage were a small army of people who had performed in the concert, backstage helpers, members of local choirs and, most importantly, a contingent of staff from the local NHS, many in uniform, who came on to loud applause from the rest of us.
After a quick practice following the words to the song which came up on the two huge side-screens we went live in ITV being led by a bevy of stars who had assembled at the Abbey Road studios in London where many of the Beatles’ hits were recorded – although we couldn’t see all that from Llangollen.


Then the words on the screens rolled, the music struck up and we started to warble along.
It was quite fun joining in and we were getting into the spirit of things by swaying and waving our arms in the air (vaguely) in time to that famous sixties tune.


All too soon it was over. We were then counted again to check the numbers who had been singing before being released into the night.
It wasn’t until I got back home and watched a re-run of the show that I learned to my disappointment that we hadn’t set the record - but it had been fun and for an excellent cause.

Posted by llanblogger at 7:14 AM