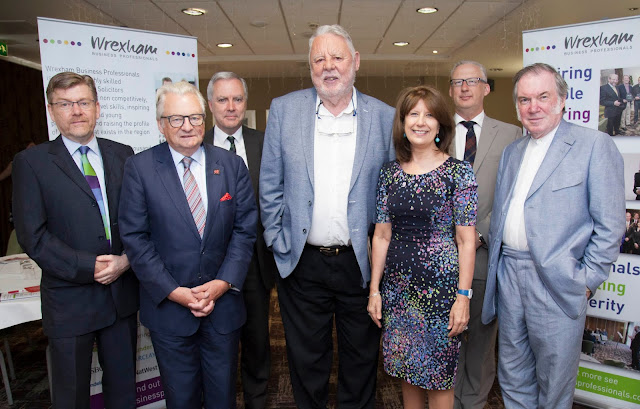 The revelation about the irony of reading material presented to the president of Llangollen International Musical Eisteddfod by his guards who were unable to speak English came during a speech to the Wrexham Business Professionals Group at the town’s Ramada hotel.

The group is made up of successful businesses and highly skilled professional firms of solicitors, accountants and other business professionals working together to raise the profile of enterprise and expertise that exists in the region and beyond.

The theme of the meeting Powering Regional Prosperity … The Art of Business and Mr Waite was there in his capacity as President of Llangollen International Musical Eisteddfod.

The ex-Church of England envoy described what life was life being held in an underground prison in Beirut for five years and how he was chained to the wall for 23 hours and 50 minutes every day, with just a 10 minute toilet break.

“I’d been negotiating for the release of hostages on behalf of the Church of England for many years,” he said.

“When you are attempting to deal with this particular problem you have to run the risk of being captured yourself and it was inevitable that one day I’d be held hostage.”

“People ask me all the time what I missed most,” he said. “Family and friends of course, but I also missed books and music.

“I pleaded with the guards to bring me books. They asked why – we’ve never read a book in our lives, they said.

“Eventually a guard said he would get me a book and a day or so later he provided one. Would you believe it was called Great Escapes and was the story of successful escapes from prison camps in the Second World War.

“The next book he got was a manual on breastfeeding and when the third was Dr Spock I decided something had to be done.

“I asked for a pencil and paper and drew a penguin. Two weeks later I got my first Penguin book. It showed a symbol is able to cut across cultural and language barriers.”

Mr Waite said he was then taken as a hostage somewhere else in Beirut and heard someone singing.

“I heard the man for a couple of days as he kept passing the building where I was held,” he said.

“It turned out it was the time of Ramadan and it was the man who walked around the town to wake people up and the way he used to do it was by singing.

“Music and language have the capacity to breed harmony into the soul.

“When today we are engaged in business and trade we have difficulty dealing with ill health or stress. We need inner calmness and the arts are a vital component.”

The meeting at the Ramada Plaza Hotel in Wrexham opened with a performance by members of the academy of the Only Boys Aloud choir. They sang three songs, finishing with a rousing rendition of Calon Lȃn.

Posted by llanblogger at 8:26 AM