After announcing their reformation and releasing their much anticipated second album Bronze Mystic in April 2017, experimental rock band Gallops have been storming headline shows and festival appearances across the UK and beyond. 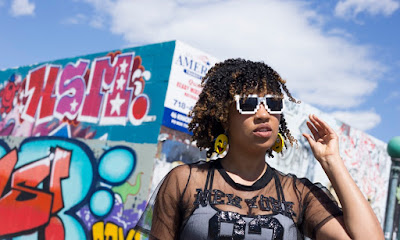 Shanthony Exum (aka Miss Eaves) is a fierce femcee known for her unique electro-pop-rap feminist stylings and fun-dance-explosion stage presence.

With her tongue-in-cheek rhymes in tow, her music has led her to perform at shows such as Tomorrowland, Dour, Les Rockomotive, and a packed out gig at South by Southwest. Most recently, touring with Wheatus and MC Frontalot around the UK.

* Tickets for International Beats at Llangollen Fringe Festival are on sale now at www.llangollenfringe.co.uk

Gallops and Miss Eaves are joined on a stellar bill (the festival's biggest to date) by LEE SCRATCH PERRY, CRAIG CHARLES, MARK RADCLIFFE’s GALLEON BLAST, LAURA CORTESE & THE DANCE CARDS, LINTON KWESI JOHNSON, LLOYD LANGFORD.  Plus the return of BAND FOR A DAY, the music themed STEAM TRAIN and AQUEDUCT BOAT trips, and many other fringe events.

The event rounds off with its now legendary closing concert in the stunning surrounds of VALLE CRUCIS ABBEY. The Fringe Finale at the spectacular Valle Crucis Abbey will this year feature the ethereal sound of GOLDEN FABLE and THE NEW SINFONIA ORCHESTRA.

Tickets for all other Llangollen Fringe performances are also available from the website, or by calling the Fringe box office: 0800 1455 779.