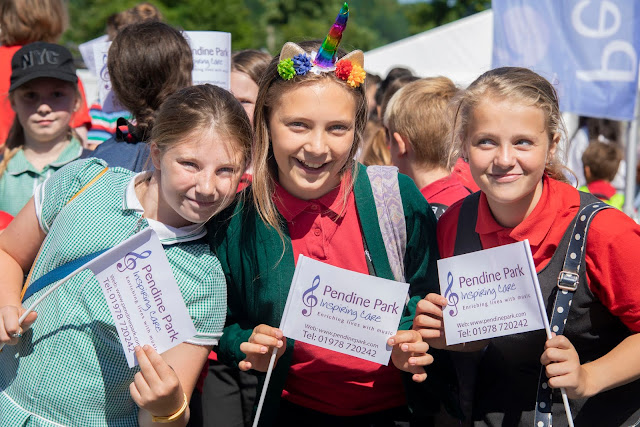 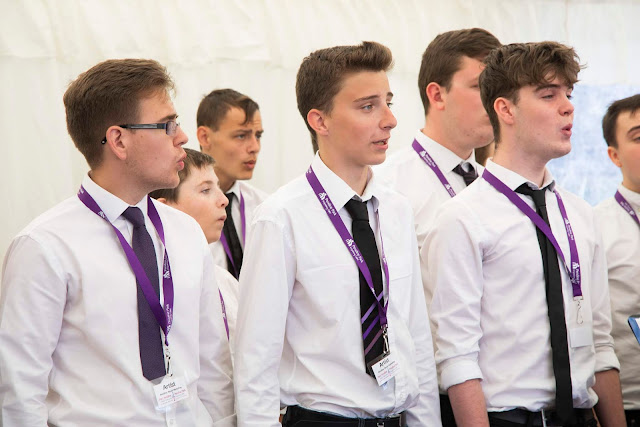 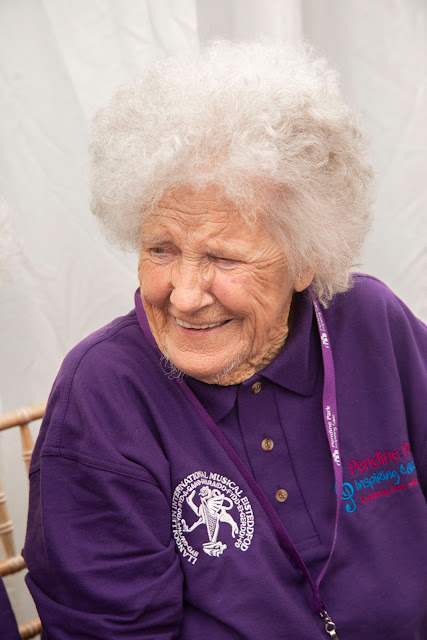 The residents of Pendine Park care organisation’s homes in Wrexham, were a star attraction as they helped fill a large marquee with non-stop music.

Strains of Yellow Submarine and My Bonny Lies Over the Ocean could be heard resounding around the tent, tempting an array of passer-by to call in and listen.

At one point an extra loud chorus of Happy Birthday filled the air as it was discovered three people in the marquee at the same time all had birthdays.

The delighted trio were Pendine Park artist in residence Sarah Edwards, young audience member Gwersyllt Primary School pupil Ethan Davies, and Eisteddfod photographer John Evans who had stopped by to capture some magical moments on film. He never expected one of those moments would be his own.

Sarah Edwards who organised the event said it was one of the most vibrant workshops yet.
She said: “We’ve been blessed with some fantastic weather and everyone is in a cheerful mood ready to sing and get into the musical mood.”

This year is the fifth time the dementia workshop with a musical theme has played a key part of the Eisteddfod programme.

For the dementia workshop school parties were invited into the marquee to join music sessions throughout the day. It offered the chance to interact with Pendine Park residents and members of the Only Boys Aloud (OBA) choir.

Both were thrilled to be helping with the workshop for the first time.

Andy said: “This is a lovely idea and cross-generational. We’ve got the very young here and the very old, both gaining a huge amount of enjoyment from the music.”

In the weeks prior to the workshop the care home residents spent time tuning up for the event with the help of top mezzo soprano Jenny Pearson and pianist Annette Bryn Parri who plays regularly for international opera star Welsh-born Sir Bryn Terfel.

The two spent time at Pendine Park taking residents through rehearsals of songs they planned to sing on the workshop day.

Pendine Park care organisation is a long-term backer of the festival via the Pendine Arts and Community Trust which supports nearly 30 arts and community initiatives.

Among them is the prestigious Pendine International Voice of the Future which is another highlight of the Eisteddfod.

Pendine Park owner and director Mario Kreft said the workshop was a great way for the care home residents to mix with young people whose enthusiasm for music was boundless.

He said: “There’s no denying music is infectious. Young and old gain great pleasure from it so what better medium for them to come together and celebrate at an event like the Llangollen International Musical Eisteddfod. Its basic premise is bringing different communities together.”

For 69 year old Hillbury Care Home resident Dianne Morris, the day was full of joy, as much of her life has revolved around music.

She was a long-standing member of Mold Choral Society for many years, took part in an operatic production of Carmen and has performed on stage with different music groups in Blackpool, Southport, Ellesmere Port and Liverpool.

She said: “Oh I love to sing and to listen to others singing. Music gladdens my heart.”

She said: “This has been a wonderful day. It’s so good to sing with the children and to hear Only Boys Aloud perform – unforgettable.”

Among the many school parties who visited the tent were Ysgol Gwernant, of Llangollen.
Posted by llanblogger at 9:57 AM