Couple to spend part of honeymoon at LlanBikeFest 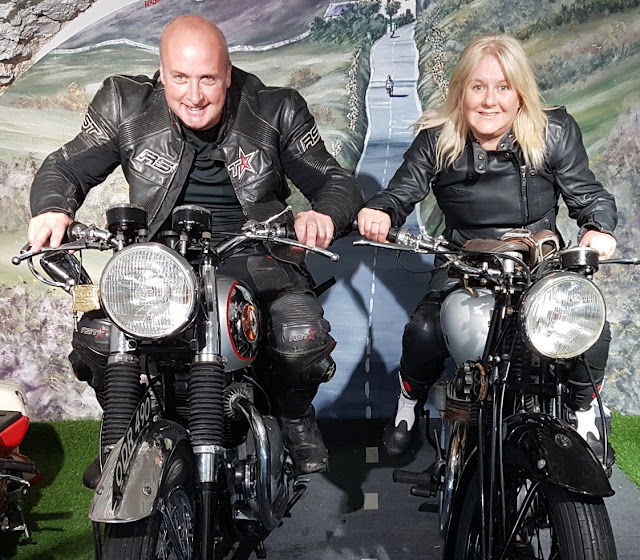 * Celebrating their marriage at LlanBikeFest will be Ian Davies and Debbie Roberts.

Bike mad Ian Davies and Debbie Roberts are celebrating their marriage in style by spending part of their honeymoon at the Llangollen Motorcycle Festival - LlanBikeFest.

The couple, from Penycae, tied the knot yesterday (Monday) at Castle Rushen, Castletown, Isle of Man.

But after dashing back to Wales for a party then returning to the island for a few days they will be at LlanBikeFest to do their bit promoting Blood Bikes Wales.

Part of a nationwide network, Blood Bikes will be at LlanBikeFest, which runs at the Royal International Pavilion on August 4 and 5, to raise awareness of their work and sign up even more volunteers.

The couple are part of a team of volunteers who ride all hours and in all weathers to transport everything from blood plasma to vital documents between NHS facilities.

Debbie said: “Ian proposed to me in the Isle of Man because he’s bike mad – and we are both passionate about supporting Blood Bikes, so we have to be back for the festival.”

LlanBikeFest director John Hutchinson said: “There has been at least one marriage proposal at LlanBikeFest but this could be our first time as a honeymoon destination.

"All good wishes to the happy couple. We are delighted to support Blood Bikes Wales for another year, as well as raising more money for our official charity, Wales Air Ambulance.”

Starring Isle of Man TT legend John McGuinness, LlanBikeFest is a great weekend for families as well as bike enthusiasts, with free entry for accompanied children aged 16 and under, and lots to see and do -  hundreds of motorcycles of every type on show, spectacular riding displays, birds of prey, rides and children’s’ entertainments, plus a great line-up of bands both days.

Day tickets are £10 online at www.llanbikefest.co.uk , or £12 on the gate, with accompanied children 16 and under free. Club stands and exhibitor bookings are free. Contact the Festival office at 07960 693398, office@llanbikefest.co.uk
Posted by llanblogger at 6:38 AM