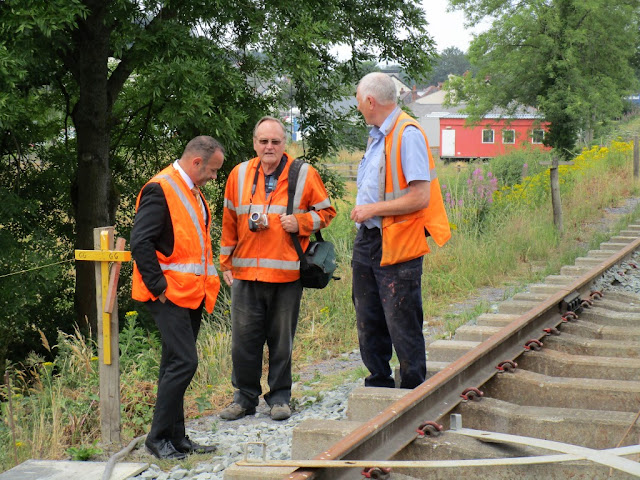 * Andy Thomas with members of the project team at line side at Corwen Central station.
Picture: George Jones.

He was given a guided tour of the station works site by project leader, Richard Dixon-Gough.

He was shown the current progress with the building of the platform 1 wall and the recently installed new-build water tank.

The building of the base wall for the soon-to-be-installed signal box was also inspected and the need for redundant materials to complete the heritage signalling facility was noted.

In the course of discussions with the volunteers, Mr Thomas noted the similarities of issues the project faced with station projects being undertaken by Network Rail and the need for more resources to complete the task.

Mr Thomas said: “I was delighted to visit the Corwen site, and see the tremendous work of volunteers first hand, especially the recently installed water tower.

“The Llangollen Railway provides the local community and visitors to the area the chance to journey back in time, and I am pleased to see the heritage railway able to expand through generous donations, including from Welsh Government.

“This is an exciting time as the new station platform is completed at Corwen Central, and I would encourage staff from Network Rail to use their volunteer leave to support the Llangollen Railway volunteers in these final stages of the project.”

Richard Dixon-Gough said: “We were very pleased to be able to show Andy how the Corwen project is progressing and contrast our efforts with those of Network Rail on developments elsewhere. Help from all sources is essential if the station is to be completed to receive trains in 2019 and the prospect of Network Rail employees volunteering to help would be most valuable.”
Posted by llanblogger at 6:32 AM