Stiwt panto has everything to make it a hit 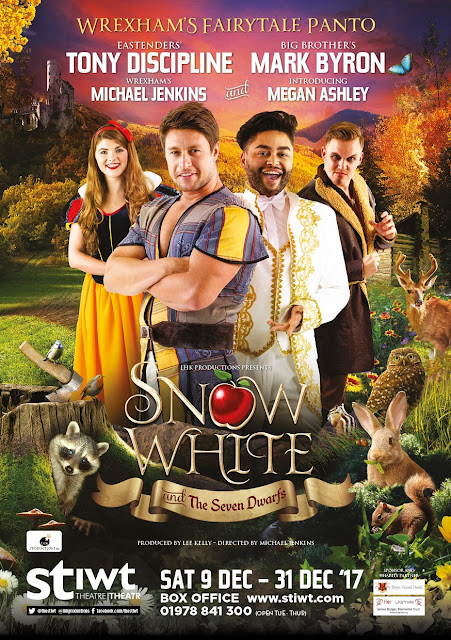 With its larger-than-life dame, frenetic comic lead and extra-nasty villain the Stiwt panto couldn’t fail to be a smash-hit.


Add in a sweet principal girl, the mother of all a fairy godmothers and a posse of super-cute oversized puppets and Snow White and the Seven Dwarfs should be pulling in the crowd this festive season.

Audience participation is always a key ingredient and the huge gang of kids packing the aisles at the lovely old Rhos theatre were hooked right from the start by Dame Debbie, forcefully delivered by the towering James Humphreys, who dared them not to scream along with the action.
Standing what appeared to be about seven feet high, if there’s a taller dame in any panto in the land this season, I’d be surprised. And his comedic talent measured up to every inch of his height.

Another character who develops that essential love/hate rapport with the crowd is Michael Jenkins as the Wicked Queen’s sneering side-kick, Henchman. A Stiwt panto stalwart, he steps out of his jackboots to direct the whole show and it’s largely down to him that the whole thing is so zingy and tight.


If the dame is extra tall, then Muddles the comic lead is the exact opposite. But what Kyle Corrin may lack in stature he certainly makes up for in sheer exuberance.
A ball of explosive energy, he fires off jokes machine-gun style and never gives the kids out front a minute’s peace. They love him for it as you can hear from the crescendo of cheers which greets his many appearances on stage.


As has become the practice with the LHK Productions-created pantos here, there has to be high-profile addition to the cast. This time there’s two – Eastenders’ Tony Discipline as the dashing hero Prince Valiant and Big Brother’s Mark Byron as the very camp Fairy Godmother.  Both are perfect in their roles.
The programme biogs don’t mention if Megan Ashley has played in any previous pantos, so this may be her first. But so competently did she handle the part of Snow White, with just the right level of sweetness, that it certainly won’t be her last.


The other lady involved is Cerys Buck. On stage she turned in a very neat Wicked Queen and off-stage she was the choreographer behind some fast-moving dance routines involving a host of talented local youngsters.
Two teams of kids take it in turn to don the clever costumes of the Seven Dwarfs. They look adorable and are yet another crowd pleaser.


There’s recently been some media fuss about at least one professional panto using a script that’s a little near the knuckle for an audience largely comprising kids.
Innuendo has long been a tradition with this type of show but the trick is to make sure things don’t tumble too far over the watershed.


This one has a bit of naughtiness, especially from Dame Debbie, but there’s definitely nothing too strong or offensive and it's all delivered in the best possible taste.
This spectacular show, packed with humour, music and an abundance of colour, is sure to delight the whole family and is on at the Stiwt until New Year’s Eve. Box office: 01978 841300.
Posted by llanblogger at 10:43 AM