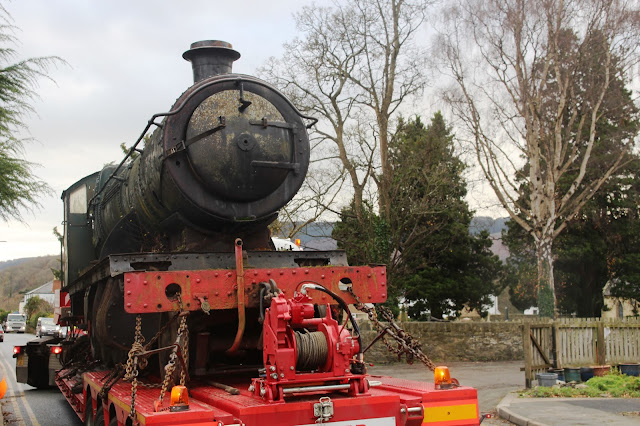 * No.2859 on Abbey Road as it heads off for its new owner's base where it will celebrate its centenary next year, having been built at Swindon in 1918.

A steam locomotive which has stood sentinel at the railway yard in Llangollen for the past 30 years has left for pastures new.

Great Western Heavy Freight loco No.2859 came to Llangollen from a scrapyard in October 1987 as an intended restoration project.

However, the cost of the task proved too much for the owners, the Llangollen railway GWR Loco group, who already had a project underway to restore a GWR tank engine.

After much heart searching, the owners agreed to find someone else to buy the No.2859 and the successful bidder brought an articulated lorry along to take the engine away to a restoration base at Congleton in Cheshire.

One day, when No.2859 has been restored to steaming condition, it may come back to Llangollen to operate on the line.

In the meantime, the proceeds from the sale are being put into speeding up the completion of Prairie tank No.5532 which the group now hopes to have in action once the boiler has been overhauled.