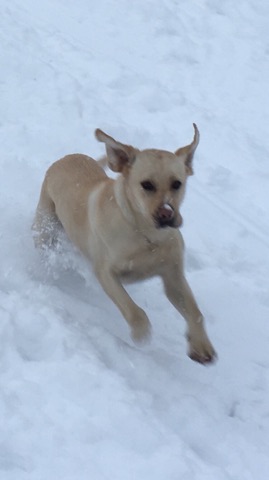 A massive community search effort helped save the life of a dog who went missing in sub-zero temperatures near Dinas Bran Castle in Llangollen last night (Monday).


Grateful owner Matthew Pritchard says the dog, named Andy (pictured), probably wouldn’t have survived the night as the thermometer plummeted to – 10 if he hadn’t have been found after 600 people shared a Facebook message to say he was missing and a number joined the hunt to find him.


Matthew said: “We acquired Andy just after Christmas last year. He was already named and believed to be 12-15 months old.


“He was being trained to sniff explosive and was destined to spend his life abroad in war zones, but luckily for him he failed to make the grade.


“Although his health and sniff were excellent he had a short attention span, possibly due to his trainers believing he was a lot older than he was. We believe he was about eight months old when he came to live with us in Llangollen.


“Andy fitted in well with our family and soon we started to run canicross with him as both myself and my partner Heather like to run.


“Andy comes out running with us at every available opportunity and we’ve even entered into canicross events where he’s come home with his own medal.


“We regularly train with our local club, Run Free Fell Runners, of which Andy could be classed as the club mascot, and it was on one of these training sessions last night that he disappeared. He runs both on the lead and sometimes off the lead and has never disappeared before.”


Describing how last night’s drama unfolded, Matthew said: “Heather and the run club were half way up Dinas Bran Castle when Andy disappeared.


“After spending what seemed like ages shouting and looking for him Heather ran back home to get another head torch, a power bank for her phone and to inform me about Andy disappearance before returning back up the castle to continue the search.