Llangollen express back to boost Ruthin 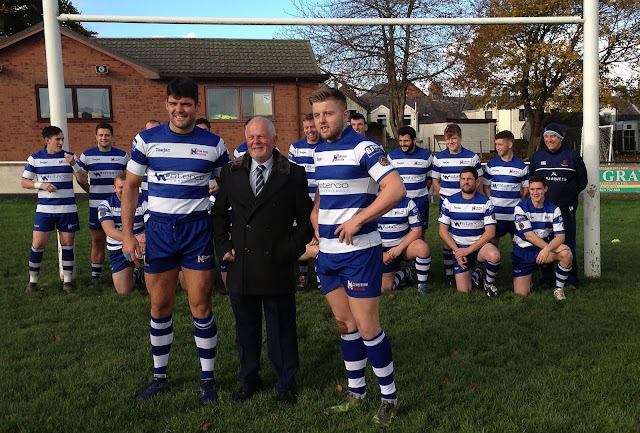 Flying winger Josh Wilson is back to boost one of North Wales’s top rugby clubs and is in hot pursuit of its try-scoring record.
The Llangollen express, who rejoined Ruthin this season after two years away at Chester, has run in nine tries in his first eight games back.
It is his second spell with the Blue and Whites and he is now past the 50-try mark for them and closing fast on the club record of 81 held by team-mate Gethin Hughes.
Things are looking up for Ruthin, who have just celebrated a short sponsorship deal with flood prevention and water management experts Waterco who are based in Ruthin and have offices in Chester and Manchester.
They have put their shirts on the Cae Ddol club, the only one of the original members of the old North Wales League never to have been relegated, and are also kitting out the 2nd XV.
And Waterco’s faith is being repaid as the club, which narrowly survived the drop on the final day of last season, are up to fifth in Division One North of the Welsh National League and have already claimed the scalp of leaders Nant Conwy.
Their young side, coached by former Wales and Sale prop Eifion Roberts and Andy Williams, are fresh from two thumping home bonus point wins, 33-22 over Bethesda with including two tries from Wilson, followed up by a 31-0 thumping of Caernarfon.
Wilson missed that game but is likely to be back for the trip to Croesyceiliog this Saturday in the Welsh Rugby Union Cup.
The 25-year-old, who lives in Cefn Mawr, said: “It’s great to be back at Ruthin. I had a successful time here before when we won the North Wales Cup and that season I had 26 tries in 23 games.
“This season has started well too so I hope to score a few more tries.
“It would be brilliant to get Gethin’s record but I just love playing for Ruthin. They’ve done a lot for me and the expansive way they like to play means I’m going to get plenty of ball.
“I know they struggled last season and I hated to see that because they’re a top five club and a great club to play for but we’ve got a good young side and a good squad and we’re headed in the right direction.”
Pedr Jones, Director of Waterco whose clients include major construction and civil engineering companies across the UK as well as local authorities and utilities businesses, used to wear the blue and white hoops of Ruthin himself.
The prop played alongside Eifion Roberts in a very successful Ruthin Youth side which also included Bristol and Scarlets centre Rob Higgitt, the last man to score a try at historic Stradey Park.
He said: “Ruthin has always been a fantastic club with flourishing mini, junior and youth sections and almost all their first team began as little kids playing mini rugby on Sunday mornings.
“Their roots are in the local community and so are our own and we’re delighted to be involved with Ruthin Rugby Club for a sixth season.
“It’s great to see them on their way back again and the current side is young enough and good enough to make a big impression on North Wales rugby in the coming years.”
To keep up with Ruthin Rugby Club go to http://www.rygbirhuthun.com/ and to see what Waterco are doing go to https://www.waterco.co.uk/
Posted by llanblogger at 8:12 AM