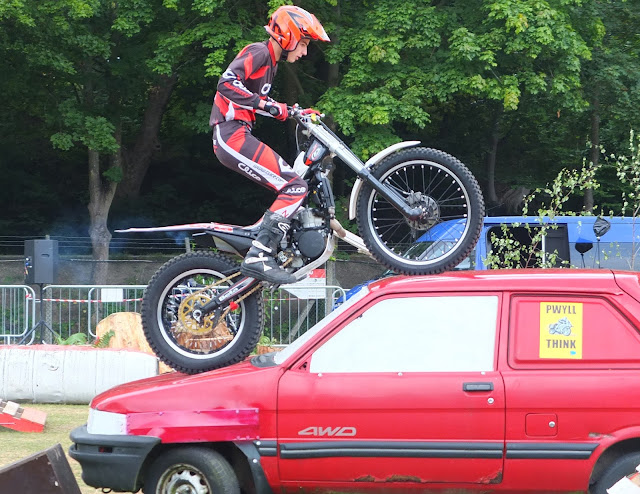 * One of the stunts performed at a previous LlanBikeFest.

Legendary 23-times Isle of Man TT winner  John McGuinness will be guest of honour for a second year at LlanBikeFest 2018 –  the Llangollen Motorcycle Festival – at the town’s Royal International Pavilion on August 4 and 5.

Despite being chair-bound and battling pain from horrific injuries he sustained when he crashed at the North West 200 in Northern Ireland in May, John (pictured below) reckons he had such a good time at LlanBikeFest in 2017 that he is raring to return. 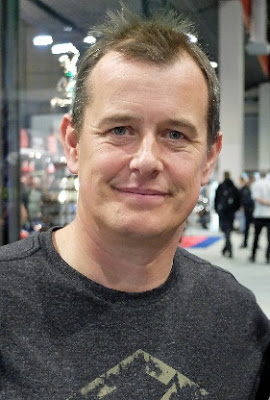 “I will definitely be at LlanBikeFest in August,” he said.

“It’s a weekend of fun and a great family affair. I feel completely re-charged. Everything feels good – but it’s been a long journey.

"Hopefully I will be in better shape next year and there is no reason I can’t bring a few more of my bike collection with me and just enjoy it.”

LlanBikeFest co-founder John Hutchinson said: “John’s courage at this year’s festival was amazing. He worked so hard to talk with fans and well-wishers that we virtually had to drag him away to take breaks occasionally. We are absolutely delighted he will be fit enough to enjoy even more of the event this year.

“As John said, LlanBikeFest is a great weekend for families as well as bike enthusiasts, with free entry for accompanied children aged 16 and under,  and lots to see and do -  hundreds of motorcycles of every type on show, spectacular riding displays, birds of prey, rides and children’s’ entertainments, plus a great line-up of bands both days.”

Star entertainments will include jaw-dropping stunts by champion trails rider Steve Colley and Savage Skills, the UK’s leading freestyle mountain bike team, plus beautiful birds from the Talonted Feathers falconry.
Posted by llanblogger at 7:46 AM