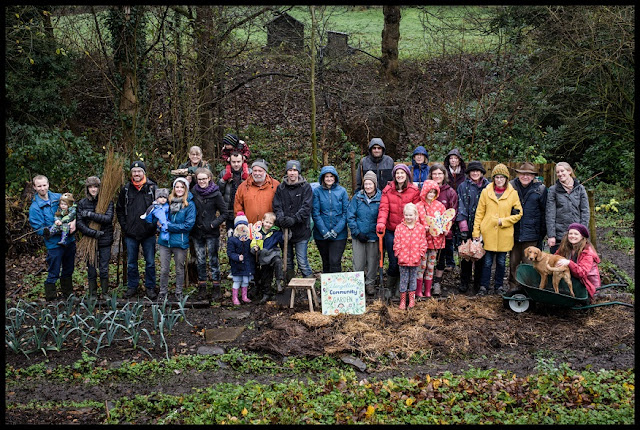 * Community gardeners on their plot.

Last month the council's Asset Management Group decided to gift the 0.5-acre plot for housing on the basis that the developer will carry out works to nearby Plas Newydd.

Founders of the garden, which was established in 2012, say they received just four days’ notice ahead of the decision, which is due to be ratified on  January 11.


They claim that although they have requested to buy the land themselves, the council has said it is not prepared to commission an independent valuation of the site.

One of the gardeners, Warren Davies, said: "There was no consultation and we have put so much work into this project, an investment of thousands of hours of volunteer work.


“It is hard not to feel disillusioned. The council is an elected public body and we feel passionately that it needs to be accountable to that community. We do not believe they have met their responsibilities under the Well-being of Future Generations Act.”


The community garden is attended by local volunteers every Saturday morning throughout the year. It has attracted more than 75 gardeners since it began and welcomed 120 local children.


Labour, Conservative and Plaid politicians have all spoken out on the issue.
Graham Timms, the Welsh Labour county councillor for Llangollen, said:  “There has been a huge reaction to the possibility of the community garden losing their current site adjacent to Plas Newydd and I have received lots of emails urging me to take action.

“The community garden has made a substantial contribution to the wellbeing of the town over the last five years. They should be proud of their achievements in providing a wide range of opportunities for lots of adults and children in Llangollen.
“Over the last few years Denbighshire, in common with councils across the country, has suffered from a huge loss in funding due to the austerity programme of the Government. This means that It has had to explore ways of using its assets that would never have been considered in more normal times.

“Whilst I understand the duty of the council to maximise the value of its assets, I fully understand the valuable contribution that organisations such as the community garden play.

Clwyd South MP Susan Elan Jones said: “I urge Denbighshire Council to liaise to take into consideration the community wellbeing of both current and future generations. Community wellbeing needs to be protected wherever possible.”

Clwyd South AM Ken Skates said: "I completely support Susan’s call for Denbighshire County Council to work closely with the community garden group towards the overall wellbeing of the community with a view to bringing this matter to a satisfactory conclusion.”


Mark Isherwood, Conservative AM for North Wales, said: “All councils should acknowledge that meaningful dialogue between public services, communities and individuals – and consideration together of all options – is crucial before decisions are made affecting community assets and local services, not only because Welsh law requires this, but also because it produces better outcomes for all."


"There are plenty of other parcels of land in the area that are more appropriate sites for development and there's no reason for a committee of unelected people to decide the future of such an important community resource."
The group is appealing to Denbighshire Council to save the Community Garden, and has set up a petition which can be found on their Facebook page and website.

A spokesman for Denbighshire County Council said: “The developer has offered an alternative location for the community garden, but this offer has been rejected.


“The council has also committed to providing a revised report for the next meeting of the Asset Management Group in January, when this group will review the decision made at the November meeting, reflecting on the additional information and supporting documentation provided by the Community Garden.


“The Group will then decide whether to progress with the proposed exchange or follow a different course of action."