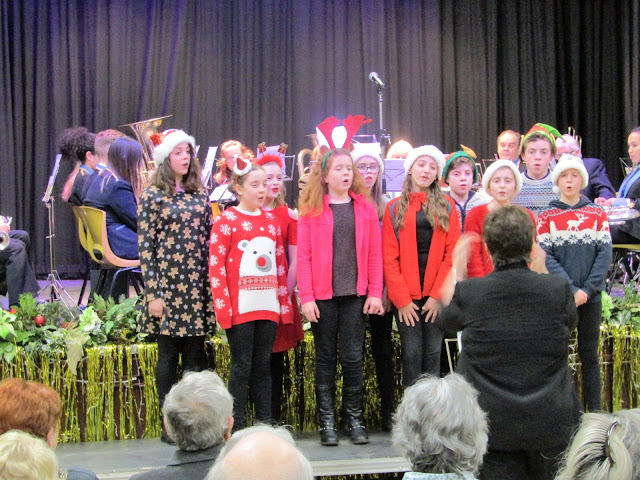 Churches of various denominations in Llangollen came together for their annual carol service at the Town Hall yesterday (Sunday) evening.

Led by the Rev Phil Poole of the Methodist Church and the Rev Andrew Sully of St Collen's Parish Church, the evening featured a selection of traditional carols, all accompanied by Llangollen Silver Band.

The band performed a number of Christmas numbers, including Tannenbaum and Stop the Cavalry popularised by Joan Lewie in the 1980s.

Musical items were interspersed with readings for a number of people including Town Mayor, Cllr Sheena Burrell.

Refreshments were provided and a retiring collection was taken in aid of the charity Embrace the Middle East.

During the evening results were announced of the Christmas tree competition staged at the Methodist Church and voted for by members of the public.

The two winners were the trees created by the town's New Dot community cinema and Llangollen Gardening Club.
Posted by llanblogger at 6:32 AM