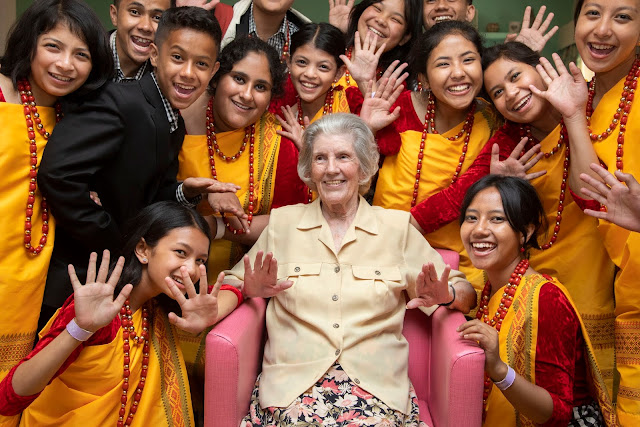 * Nancy Povey  with members of the Aroha Choir.

A former Llangollen souvenir shop owner who made it her mission to visit the town’s International Musical Eisteddfod every year was over the moon when one of the most colourful and melodic acts from this year’s event gave a concert at the care home where she now lives.

Nancy Povey, 90, a talented pianist and music lover, said she was delighted to listen to the Aroha Junior Choir perform for residents at Hillbury House Care Home, Wrexham.

The choir hail from Shillong, the capital of Meghalaya province in north east India and this year is their first visit to the annual festival at Llangollen which attracts competitors from all over the world and promotes the message of peace and friendship through music and dance.

Chatting to the choir members while posing for a photograph with them Nancy told them after their performance that from now on there would always be a welcome in Wales for the Aroha choir.

She said: “This year is the first year I haven’t been able to get to Llangollen International Musical Eisteddfod. I would always go every year. I love it listening to musicians from all around the globe.

“I had been feeling a little sad that I wouldn’t get to go there anymore, but having the choir here was just like having the Eisteddfod brought to us. It was as if I was there in the main pavilion again, listening to all the beautiful music.”

The Aroha choir were in turn thrilled to be asked to deliver an afternoon performance for residents of Hillbury House, which is part of  Pendine Park Care Organisation, a key sponsor of Llangollen International Musical Eisteddfod.

Pendine Park Artist in Residence, Sarah Edwards, said: “The choir’s performance was amazing. It was a privilege for us all to get the chance to meet them and listen to them sing at such close quarters. Their voices are outstanding.”

The choir comprises young people aged from 11 to 19. About 20 choir members, leaders and some of their parents made the trip after a long fundraising campaign to pay for the journey to Wales.

Among the parents who came from India were Toony Gill, whose daughter Denise, 15, is a choir member, and AJ Lynrah, whose son Aryan, 14, sings in the choir.

AJ said: “It has been wonderful for us all making this first visit to the Eisteddfod. It is a hugely inspiring festival and we feel honoured that the choir was also invited to come to Hillbury to meet the residents and sing for them.”

Choir director and conductor Pauline Warjri said they had rehearsed for many months for their visit.

She said: “It has been a wonderful experience and everyone has been exceptionally friendly towards us.”

Pauline and choir member Venetia K Warshong, 16, went out of their way to deliver an extra special rendition of Amazing Grace for the Hillbury residents.

It is not normally on the choir’s repertoire but when one of the residents, Dianne Morris, 69, asked for it, Pauline and Venetia performed an impromptu duet of the classic hymn.

Dianne, a former choir singer herself, said: “It was truly entrancing. Venetia’s voice is angelic. I even think she hit a top C. Wonderful.”

The choir, dressed in vibrant red and gold costumes, performed traditional folk and spiritual songs a capella including Ezekiel Saw the Wheel, a medley of Disney musical favourites, which featured Let’s Go Fly a Kite and hymns including I Need Thee Every Hour.

Their performance brought tears to the eyes of care assistant Ellen Griffiths, who said the young singers had some of most beautiful voices she had heard.

She said: “It was so moving, I never expected it to be so emotional, but I could feel my eyes welling up.”

Hillbury residents gave the choir a rousing cheer at the end of their concert and spent time chatting with some of the choir members about their musical heritage. They also had photographs taken as a memento of the occasion.

One resident, Margaret Newell, 96, delighted in having a selfie photo taken with choir member Mason Mario.

She said: “The boys and girls in the choir are all lovely. They look so bright and cheerful in their traditional costumes and they sing so beautifully. I wish them lots of success at the Eisteddfod and for the future.”
Posted by llanblogger at 6:38 AM