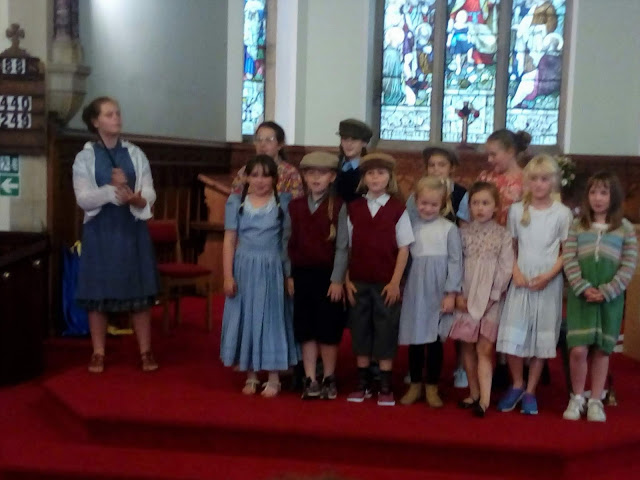 * The cast of Smiling in the Sunlight Laughing in the Rain.

A group of lively youngsters put the clock back over 60 years at Llangollen Methodist Church last night (Monday).

About a dozen members of Llangollen Operatic Society’s junior section, the Young ‘Uns, revived memories of the early 1950s in a half-hour playlet called Smiling in the Sunlight Laughing in the Rain.

All the sketches were based on local recollections of what it was like to be a child in this town in the decade after World War Two when mobile phones and social media had never even been dreamt of.

The trip down memory lane started with an evocation of a local junior school class where the teacher ruled her young charges with iron discipline.

The appreciative audience was then taken to the local grocer’s shop where another well-remembered lady dispensed her goods without the aid of an electronic till - but never on a Wednesday which was half-day closing.

By the mircale of imagination it was then Christmas in 1950s Llan where the kids opened the presents while mum put the finishing touches to cooking the chicken - apparently, turkey was only for the well-off back then.

Along with the kids we then boarded an ancient charabanc to be transported to Rhyl for a day out of paddling and sand castles.

This was a marvellous interlude of golden memories presented by a talented bunch of children and well put together by Pam Williams of the Operatic and other helpers.
Posted by llanblogger at 11:23 AM