Final preparations are taking place to launch a campaign urging dog owners to keep their pets on leads in the Denbighshire countryside, ahead of the main lambing season.
The Take the Lead campaign, now entering its second year,  is being managed by Denbighshire Countryside Services and the Clwydian Range and Dee Valley Area of Outstanding Natural Beauty.
This campaign is aimed at dog owners of all ages and has been set up to support efforts by North Wales Police to educate and raise awareness of the issue and encourage dog owners to think and act responsibly when they visit the countryside.
It is illegal to allow dogs to worry sheep when they are off the lead.  This can be a specific problem during lambing season where sheep may be frightened by dogs and could put their unborn lambs at risk. 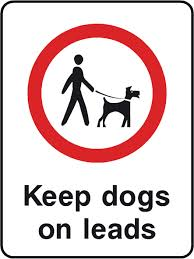 The consequences of allowing dogs to worry sheep could include a fine and potentially a destruction order if the matter is taken before the courts.
The campaign will focus predominantly through social media and the local press, with support and input from a number of partner organisations and local landowners.
Councillor Tony Thomas, Cabinet Lead Member for Housing, Regulation and the Environment, said: “Last year’s campaign was successful, with many more people heeding the message and keeping their dogs on leads.  We would like to thank them for their co-operation and their efforts to protect the well-being of grazing sheep in our countryside.
“The problem is caused by a minority who either wilfully ignore the law and our appeals, or who simply don’t understand what they are doing is wrong.
“This year’s campaign will build on last year’s activity and we will take the opportunity to drive home the message”.
Councillor Hugh Jones, Chair of the Clwydian Range and Dee Valley Area of Outstanding Natural Beauty’s Joint Committee, said: “Our countryside is deemed to be amongst the best in the whole country and we fully understand why people would want to bring their dogs to such idyllic surroundings.
“We are proud of our countryside and want everyone to enjoy the beautiful surroundings, whilst respecting the fact that they will be crossing land used for grazing purposes.
“It’s all about reminding people of their responsibility to follow the Countryside Code and to keep their dogs under control at all times”.
The full campaign will be launched ahead of the Spring.
Posted by llanblogger at 8:07 AM