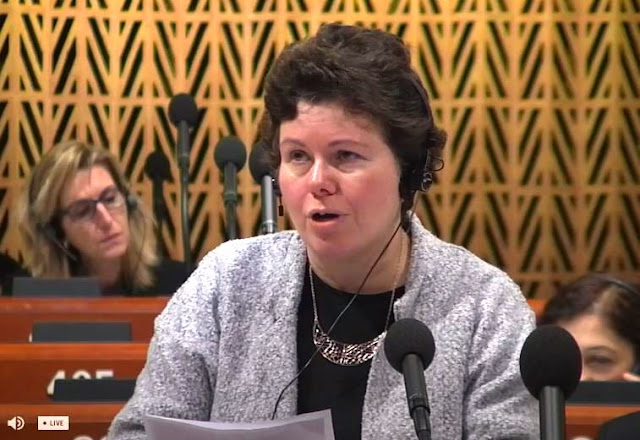 * Susan Elan Jones MP speaking at the Parliamentary Assembly of the Council of Europe.

Susan Elan Jones MP has described the role of Welsh-medium schools and broadcasting outlets S4C and Radio Cymru at the Parliamentary Assembly of the Council of Europe.

The Clwyd South MP outlined how the Welsh language was barred as an official language in the sixteenth century and Welsh children were banned from speaking it in school when universal education began.

However, speaking on behalf of the Socialist Group of democratic socialist and social democrat parties across Europe, Ms Jones made the point that nowadays it was not just Welsh-speakers who sent their children to Welsh-medium schools.

After her speech, she said: "The subject of regional and minority languages was debated following a very thoughtful report by a Hungarian Christian Democrat MP.

"In my contribution, I wanted to make the point that although  language differences across some parts of Europe can trigger division and in some cases, full-blown ethnic discord, it doesn't have to be like that. Minority and regional languages can and should be a source of great strength. I was pleased to share my experience as a Welsh MP."

Ms Jones was recently elected by the UK Parliament to be one of the Labour representatives on the Parliamentary Assembly of the Council of Europe - a body that meets a couple of times a year in Strasbourg.

Founded in 1949, the Council of Europe has 47 member states, covering approximately 820 million people, making it far bigger than the 28-nation European Union.

The Council of Europe does not make laws, but does have the power to enforce select international agreements reached by European states on various vital concerns including the prevention of torture and human trafficking.
Posted by llanblogger at 6:38 AM