Young 'Uns dazzle with Joseph and his Dreamcoat 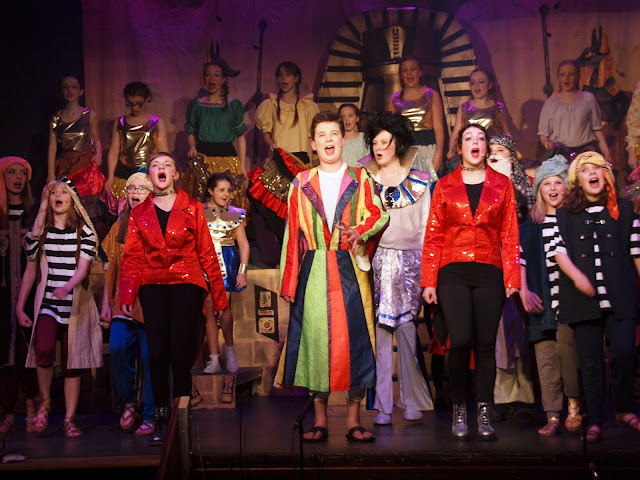 * The cast of Joseph take the stage. 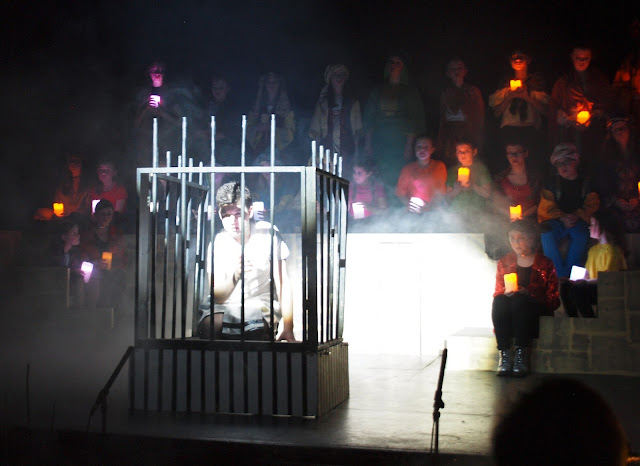 * An emotional moment for Cassius Hackforth in the title role. 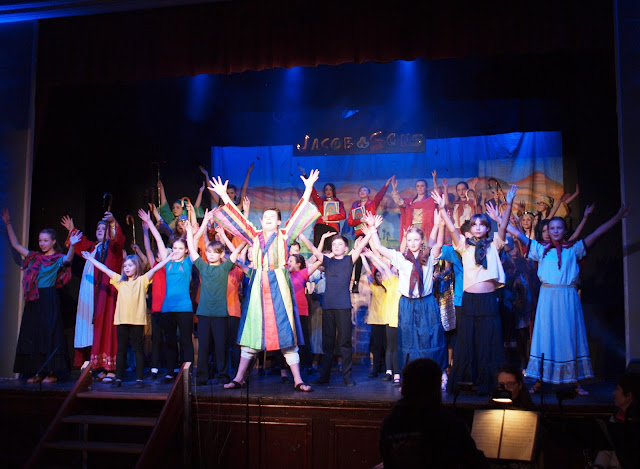 * The entire ensemble get in on the action.

The current production of Joseph and the Amazing Technicolour Dreamcoat by Llangollen Operatic Society’s Young ‘Uns is every bit as dazzling as the fabulous garment of the title.
Almost 40 raring-to-go youngsters take to the Town Hall stage to deliver their interpretion of the classic Lloyd Webber and Rice musical which has had audiences flocking to see it for the past 50 years.


And ensuring that their vitality and talent have the perfect launch-pad is a small behind-the-scenes army who have built some wonderful stage sets and created dozens of clever, colourful costumes.
Add to that a powerful eight-piece band and a thoughtful direction/production team and it was hard to go wrong.


The show gives a modern slant to the biblical tale of Joseph’s coat of many colours from the book of Genesis.
The hero starts off as the favourite son of Jacob back in old Israel and is so adored that his doting dad hands him a splendid multi-coloured coat.


But when he’s beaten up and the coat ripped to shreds by his jealous siblings he ends up as an outcast eventually fetching up in neighbouring Egypt.
There his talent wins him favour with the Pharaoh which ensures a rapid rise to power and fame and his elevated status puts him in a position to turn the tables on his envious brothers.


The multi-talented Cassius Hackforth takes the title role which he handles, as usual, with supreme style displayed in both the acting and singing departments.
Shea Ferron, another of the Young ‘Uns rising stars, is the Pharoah interpreted nicely as an enormously-quiffed and hip-swivelling Elvis.

Aled Morris doubles delightfully as old Joseph and Potiphar, while other principals who handle their parts with aplomb are Erin Roberts and Celyn Orton-Jones as the two narrators, Sophie Roberts as Mrs Potiphar, James Reardon as the Butler and  Luke Reardon as the Baker.


Backing them all the way – an essential as it’s an all-sung show – is an enormous chorus who dazzle and shine at every opportunity.
Joseph must be one of the most testing shows that the Young ‘Uns have staged but the amazing back-up brigade have risen remarkably to the challenge. They're spearheaded by Pam Williams as producer, Julian Cattley as musical director and Jo Lloyd as artistic director.


The stage sets are amazing, the costumes fabulous and the music magnificent.
The show starts this Thursday and runs through until Saturday and go and see it if you want a little colour in your life on a drab winter day.

* Tickets are still available from Bailey's, jades, Gwyn the butchers or online at www.ticketsource.co.uk/llangollenoperaticsociety

Posted by llanblogger at 8:43 AM