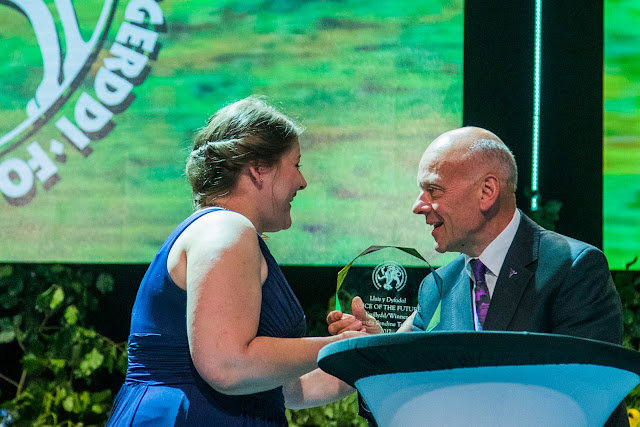 A “sensational” soprano who won one of the main prizes at an international festival is urging young soloists from around the world to enter this year’s competition to launch their career on the global stage.


According to Sian Dicker, 27, being crowned the Pendine International Voice of the Future at the Llangollen International Musical Eisteddfod has been a boost to her career aspirations to become a leading opera singer.


Organisers say entries are already flooding in for the prestigious competition, which will see some of the world’s best young singers compete for the Pendine Trophy and a first prize of £6,000, along with two runner-up prizes of £2,000.


Every year the picturesque town of Llangollen in the Dee Valley welcomes around 4,000 international performers and as many as 50,000 visitors to the week-long festival of music and dance.


Among the highlights of the week is the prestigious Pendine International Voice of the Future competition, which showcases young talent alongside other gifted global performers.


Once again this year the arts-loving care organisation Pendine Park is contributing  £5,000 to the prize fund, with the balance coming from Sir Bryn’s Terfel’s foundation and Llangollen Eisteddfod


Following her experience last year, Sian, from Trowbridge in Wiltshire, is urging other young soloists not to miss the March 2nd deadline.


Sian said: “The Pendine International Voice of the Future competition is the perfect platform for aspiring soloists to launch or accelerate their musical careers.


“Whilst the money has been incredibly beneficial, the real value is the unique experience of taking part alongside world-class competitors, learning from one another and making connections with other artistes.


“The International Eisteddfod is so welcoming and inclusive to performers from all backgrounds. I would urge any singer to enter and absorb everything that this special international-standard musical performance offers them.”


Since her winning performance wowed the adjudicators, leading soprano Elin Manahan Thomas and composer Gareth Jones, Sian has used the prize money to fund the final year of her Masters at the Guildhall School of Music and Drama. She is also collaborating with pianist Stephen Rose, who was the accompanist in last year’s Pendine International Voice of the Future competition.


Mario said: “The standard of competition last year was exceptional and Sian’s sensational performance was truly worthy of winning the title.


“Our aim in supporting the competition in conjunction with Sir Bryn Terfel is to provide a springboard for brilliant young singers from around the world to achieve their dreams of establishing a career on the global stage.


“Sir Bryn is living proof that supreme talent can take you a long way and we are delighted to doing our bit to help gifted young singers attain new heights.


“The competition chimes perfectly with our ethos at Pendine Park because the arts in general and music in particular provide the golden thread running through everything we do to enrich the lives of our residents and staff alike.”


The final of this year’s competition will take place on Wednesday July 4 as part of The Classical Collection evening concert which will see the festival’s music director, Vicky Yannoula, who is also an accomplished pianist, performing on the iconic pavilion stage for the first time.


She will be joining forces with another distinguished pianist, Peter Jablonski, to perform a “dynamic and moving musical collaboration”.


Vicky said: “The Pendine International Voice of the Future competition grows in prestige each year and the calibre of entrants so far has been exceptional. I am looking forward to sharing a stage with the talented finalists in a celebration of two powerful instruments, voice and piano.”


The competition will span two days of the 2018 festival, with the preliminary round requiring competitors to perform a contrasting programme of up to eight minutes of music - Oratorio/Opera/Lieder/Song - to be sung in the original language. For the final this year, selected competitors will take to the Royal International Pavilion stage where they will be required to perform up to 11 minutes of music.


* The competition is open to anyone over 19 and under the age of 28 on the day of the competition. Entries for the 2018 competition will close on Friday, 2nd March, and hopefuls can apply on the Eisteddfod participants’ website http://eisteddfodcompetitions.co.uk/.


Tickets for The Classical Collection and all other evening concerts are available from http://llangollen.net or phone the Box Office on 01978 862001.