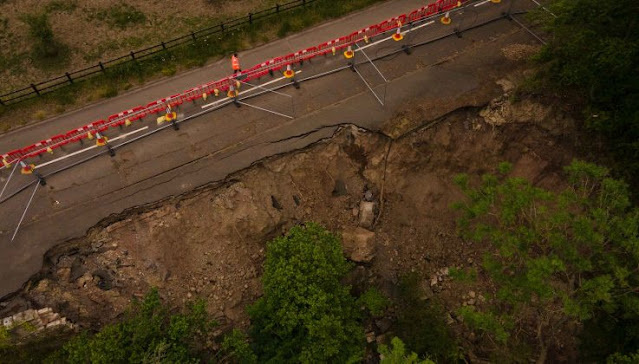 * Landslide damage on the B5605 between Newbridge and Cefn Mawr.

North Wales MS Mark Isherwood has questioned the Minister for Rural Affairs and North Wales over funding to repair and reopen the B5605 between Newbridge and Cefn Mawr, which has been closed since January due to a landslide.

Speaking in yesterday’s meeting of the Welsh Parliament, Mr Isherwood, who has been liaising with residents affected by the road closure and Wrexham County Council, emphasised the need to carry out the repairs as soon as possible and questioned the Minister, Lesley Griffiths MS, over funding to do this.

He said: “Earlier this year, I visited the site of the landslide between Newbridge and Cefn Mawr caused by Storm Christoph, with the B5605 there closed.

“When I wrote to the Welsh Government about this damage to key infrastructure, the Deputy Minister for Climate Change’s response in July stated that Wrexham Council’s funding application to the Welsh Government  ‘was unsuccessful because repair works would not reduce the risk of flooding to properties and would only benefit the highway’.

“Wrexham Council’s Environment and Transport lead then wrote ‘we anticipate repair costs of circa £1 million and are concerned that without some support the Council will be unable to fund these storm related damages’.

“As an affected constituent wrote this month ‘many in these villages do not have cars … needing transport which involves walking miles to the nearest bus stops, or having to hire costly taxis’.

“How do you respond to their statement that ‘the biggest obstacle will be securing funding this financial year to enable us to plan and carry out the works as soon as possible’?”

In her response the Minister said: “My understanding, when I last had a discussion around this issue with the deputy leader of Wrexham County Borough Council was that they believed the ball was firmly in their court, and they were processing their application, so I don't recognise that.”

Speaking after the meeting, Mr Isherwood said: “This was a very strange response, given that it was Wrexham Council’s Deputy Leader and Lead Member for Environment & Transport who stated in an e-mail sent to myself and others earlier this month that ‘As soon as we are ready we will be submitting a business case for funding for the road to be rebuilt, I am sorry that this has taken so long but we should by the end of this year be in a position to bid for funding. The biggest obstacle will be securing funding this financial year to enable us to plan and carry our the works as soon as possible’.”