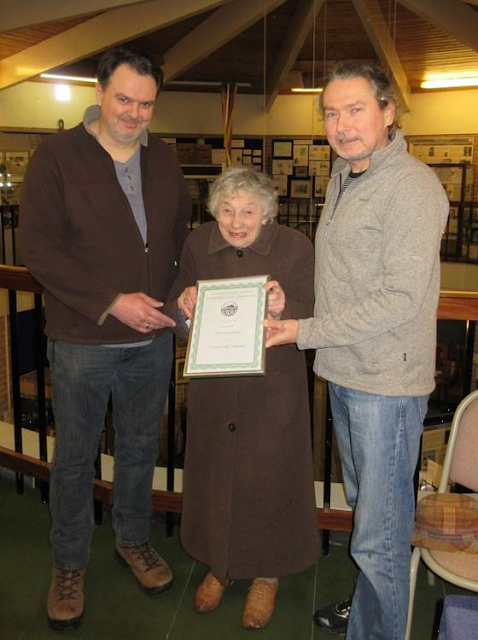 * Llanblogger pictured Betty Lowe in 2016 when she
presented the Llangollen Civic Society Award to Rhodri
and Penri Thomas as the society's life president.

Betty Veronica Lowe was born in Acrefair on 17th November 1924, daughter of William and Gwendolen Lowe.

Her Llangollen roots go back a long way. Her great grandfather, Edward Roberts, landlord of the Grapes, was one of the early mill owners of Llangollen who established Upper Dee Mill.

One grandfather, Evan Evans designed the King’s bridge at Berwyn. On leaving school she attended a Housekeepers Course at the FL Calder College of Domestic Science, Myrtle Street, Liverpool. But she was also a gold medalist of the London Academy of Music and Drama During the war, she was heavily involved with caring for her mother at their home, Holmwood, at Berwyn.

As well as looking after her mother, she taught drama at Llantysilio for Miss Grace Lloyd Williams and also taught Drama and elocution, at several schools, including Howells, Denbigh, during the 1970’s.

As well as being a founder member of the Twenty Club, she was involved with Llantysilio WI, a member of the Eisteddfod floral committee for many years, Hanes, and was made Life President of Llangollen Civic Society, having been chair some time. 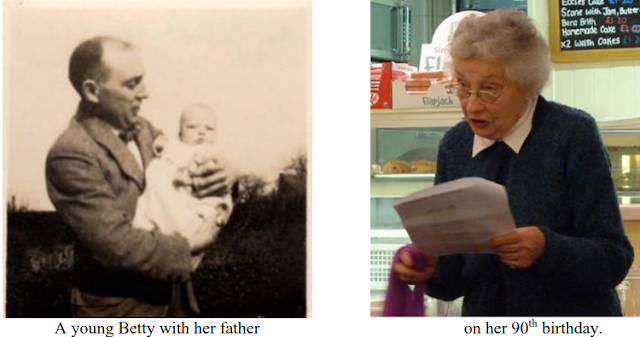 Betty passed away just as the dramatic society she helped to pioneer celebrated its 75th anniversary with a smash-hit production of French-themed TV comedy 'Allo 'Allo.

Llangollen Twenty Club gets its name from the fact it was founded in 1946, a year after the end of World War Two, by 20 people keen an the amateur stage, including Betty as a young woman.

Chrissie Ashworth, who directed 'Allo 'AlloI and a number of previous shows, said: "Personally I learned a good deal from Betty, her observations and attention to minute details were important to her.

"She had many varied roles on stage over the years and I can vividly recall her in Madame de and The Coffee Lace back in the early 1970s.

"She taught elocution at the prestigious Howells School in Denbigh for many years and her cut-glass accent was legendary.
"She directed many plays and her word was law! She did, however, have a wonderful sense of humour and mimicry and was never afraid to poke fun at herself."
Chrissie added: "She loved her dogs and a familiar sight was Miss Lowe walking her little dog through town, along the canal or Riverside, very upright, dressed impeccably in a long coat and always wearing a hat!
"Thank you for your huge contribution to the XX Club, Betty. R.I.P."
Posted by llanblogger at 3:06 PM