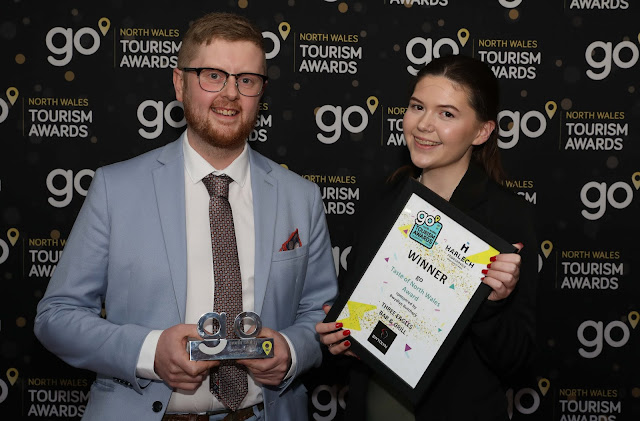 A Llangollen restaurant and bar has been named North Wales’s best eatery at the region’s tourism Oscars.

The Three Eagles Bar and Grill’s successful transformation to provide an outdoor dining offer won them the Go Taste of North Wales, sponsored by Bwydlyn Butchery.

A delighted restaurant manager Lydia Davies said: “We’ve got a really good team here doing lots of hours and their hard work has paid off.

“We made a really big change because we wanted the Bar and Grill to be more accessible and we’ve opened up our outdoor space which has really helped us because as well as our regulars we’ve got lots of visitors coming in.

“We get lots of walkers and cyclists and people walking their dogs and Llangollen itself is a great attraction and an outdoorsy place.”

The Three Eagles received its accolade at the Go North Wales Tourism Awards, a glittering event at Venue Cymru in Llandudno sponsored by leading food distribution company, Harlech Foodservice, and hosted by acclaimed journalist Sian Lloyd who hails from Wrexham.

The occasion was also a 30th anniversary celebration for organiser North Wales Tourism which was founded in 1990 and now represents more than 1,500 members across the region.

According to Chair of the judges Jim Jones, the chief executive of North Wales Tourism, the amount of investment going into improving the infrastructure of the tourism and hospitality sector was a vote of confidence in the future of the industry in North Wales.

Before the pandemic, the tourism industry was flying with the overall income generated increasing to an all-time high of £3.6 billion in 2019 when the number of visitors rocketed to nearly 37 million.

After a massive slump, the staycation boom this summer showed that North Wales was still a hugely popular destination for holidaymakers.

Jim Jones said: “Like everybody else, the tourism industry has endured an absolute nightmare over the past 20 months and, because of the nature of the business, our sector was disproportionately affected during the lockdown periods.

“I would like to congratulate the winners and the other finalists tonight because was they have achieved is utterly remarkable, particularly under the most difficult of circumstances.

“I would also like to stress that all the nominees are playing an absolutely vital role in leading the economic recovery here in North Wales and I would like to thank them for their incredible ongoing contribution.”

David Cattrall, the managing director of Harlech Foodservice, said: “We were delighted to have the opportunity to be the headline backer of the awards and to sponsor two individual categories because the tourism and hospitality industry represents our core customer base.

“Although we’ve all had an extremely tough time, there are reasons to be optimistic for the future and the scale of investment going into North Wales shows there is a strong belief that this is a first-class, must-visit destination.”