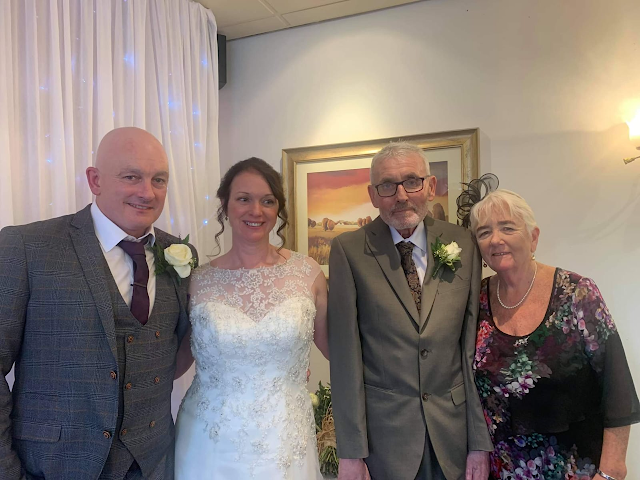 * Ken Chesworth and his wife Angela at the wedding of their son Mark and daughter-in-law Rebecca.

A man was able to witness his son’s wedding thanks to hospice staff who stepped in to get him spruced up and ready to join the family celebration.

Ken Chesworth, 70, has a rare form of Motor Neurone Disease, known as man in a barrel syndrome.

It means those with the condition can eat, talk, and walk but have no use of their arms.

It makes caring for the former Kellogg’s worker doubly difficult, and Ken relies on wife Angela for all his care needs at home.

When the couple’s son Mark announced his marriage to fiancé Rebecca, they felt it would be too overwhelming for Ken and he would miss the big day.

Ken, from Wrexham, was adamant he wanted his wife to enjoy the occasion, including the preparations, without her having to worry about getting him ready. Angela often stays awake at night to monitor Ken’s breathing so is regularly sleep deprived.

The couple were delighted when Nightingale House staff suggested he came to the hospice for respite care over the wedding weekend.

Ken arrived at the hospice the day before the wedding and staff helped him get showered and dressed to attend Mark and Rachel’s big day at The Guildhall in Wrexham the following morning.

Ken, who attends the hospice every week, had previously had six days of respite at the hospice in the spring and the couple knew the positive impact the stay had on them both.

It was a double benefit for them both as Ken didn’t miss out on the wedding and Angela had a well-deserved pamper, relax and some much-needed sleep, knowing her husband was being well cared for in Nightingale House.

Ken said: “It was a wonderful day and the nursing staff at the hospice couldn’t do enough to make the celebrations as stress-free as possible for us, and most importantly for Angela, who didn’t have to worry about me.

“Many people think a hospice is just for end-of-life care but it’s so much more than that. I come to Nightingale House knowing people here care for me. I thought it was only for people with cancer, so when they said I could come here to it was a nice surprise and I haven’t looked back since.”

Ken says Motor Neurone Disease has robbed him of everything as he is no longer able to drive or enjoy hobbies or feed himself.

He says he has accepted his condition will get worse, but the hospice team have helped him, and Angela come to terms with his illness because “they are good listeners, and you can say things to them that you can’t share with your family”.

Ken added: “I can’t believe that this service is entirely free. It feels like a hotel where no money is involved, and everyone knows your name. To all those who fundraise and donate to help people like me thank you so much.”