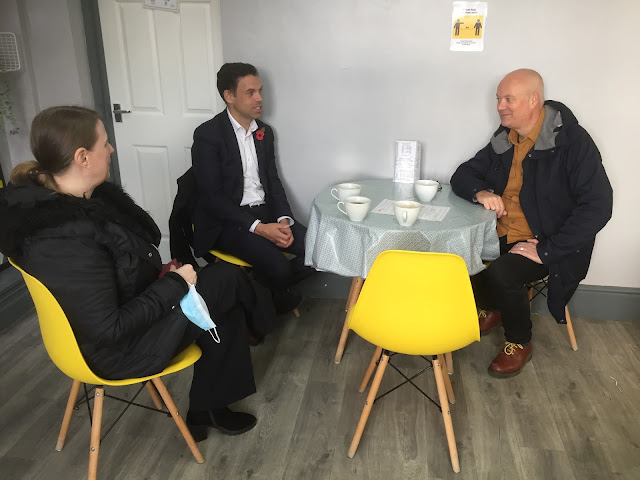 Small businesses were asked for feedback on local banking services when the man spearheading plans for the UK’s first community bank visited the area.

Clwyd South MS Ken Skates welcomed Mark Hooper from Banc Cambria to his constituency for further discussions on how the Community Bank of Wales could benefit local communities.

Mr Skates raised the issue of local bank closures in the Senedd earlier this year after previously launching the Community Bank plans during his time as Economy Minister.

His constituency has seen 80% of its high street banks close since 2015 – more than any other area of North Wales – and now has just one surviving branch.

He said: “Banc Cambria is working with the Welsh Government to create the UK’s first community bank, which will provide everyday banking throughout Wales. Unlike other banks, it will be owned and controlled by members – not outside shareholders.

“As I have said previously, communities right across North Wales have been abandoned by the big banks and left high and dry by the UK Government abandoning its agreement with the sector that that last branch in each community should remain open. We need this.

“While I am hopeful that Clwyd South will be chosen for one of the first few Community Bank branches in Wales, Mark’s visit was about talking to small businesses in our area and finding out what they need and how this project could help.”

After a walk around Ruabon with local councillor Dana Davies and talking to high street businesses including Ruabon Discount Store, Tracey’s Nail & Beauty Salonand Caroline’s, it was on to Cefn Mawr to chat with more small firms.

Mr Skates said: “It was really a very productive morning showing Mark around Ruabon and Cefn and talking to local businesses.”

Mr Hooper said: “Small business owners told us from first-hand experience what it’s like to operate without a local bank branch. Whether it’s depositing cash or dealing with an issue regarding mandates, you have to take time out of your business, and nobody wants that.”