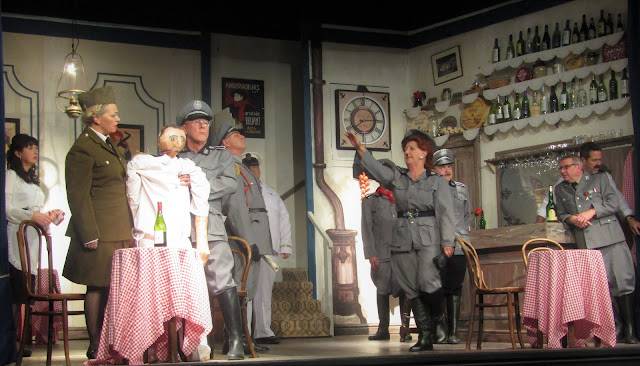 * A scene from 'Allo 'Allo, with others below. 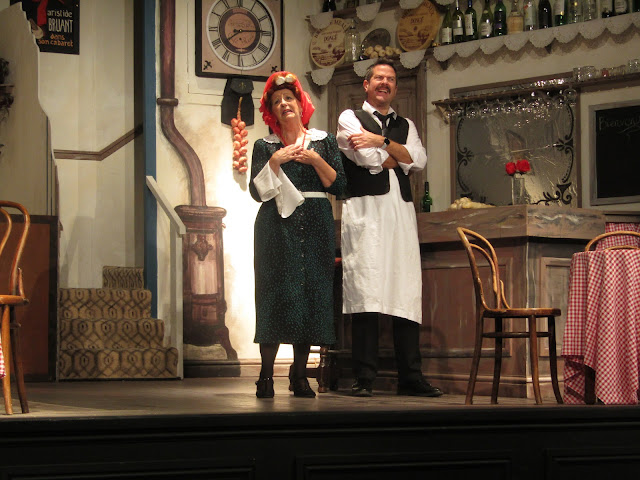 * Rene and his wife Edith. 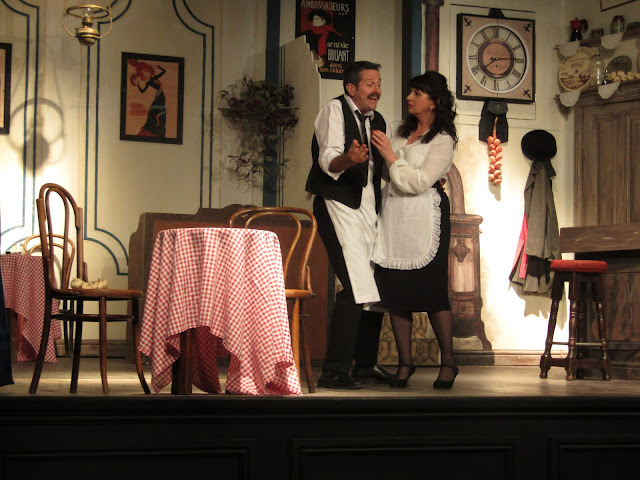 * The cafe owner with one of his waitresses. 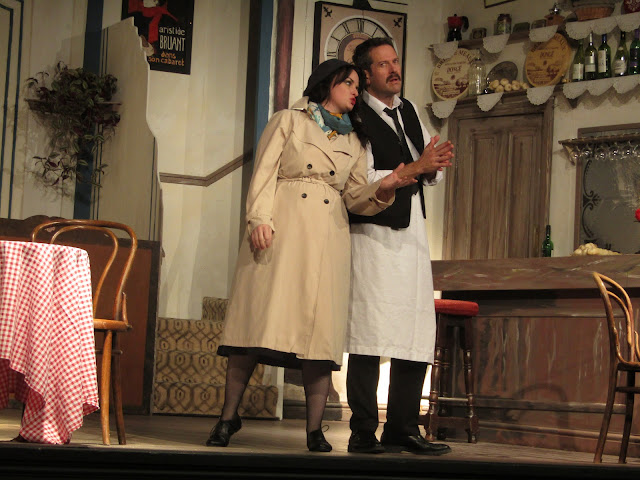 * Listen carefully, I will say this only once. 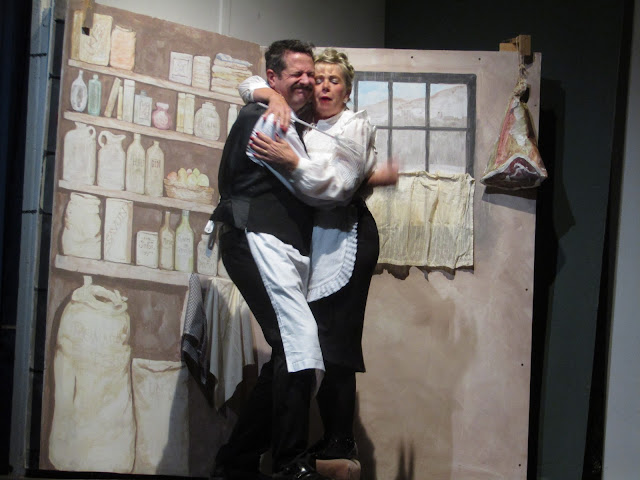 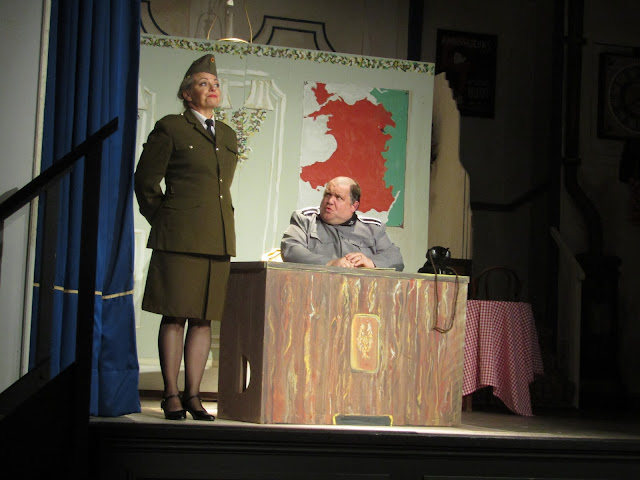 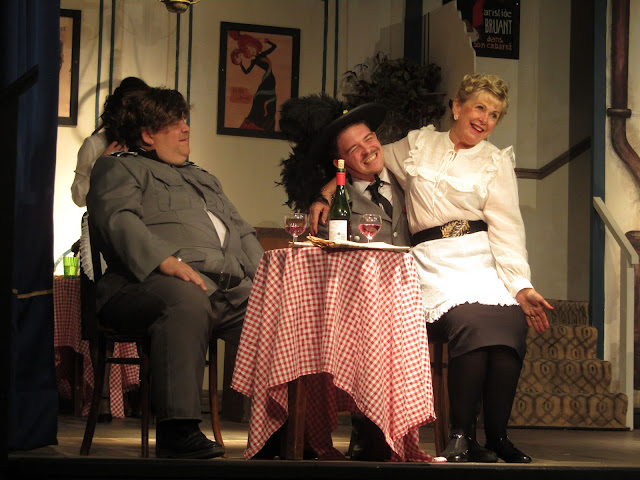 * The general and the captain share a joke with Mimi. 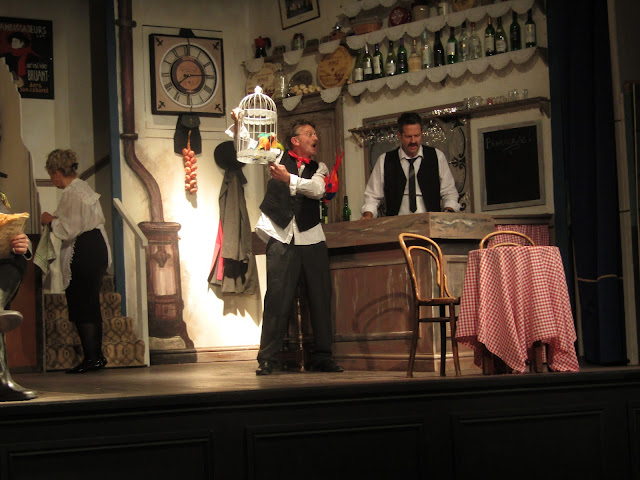 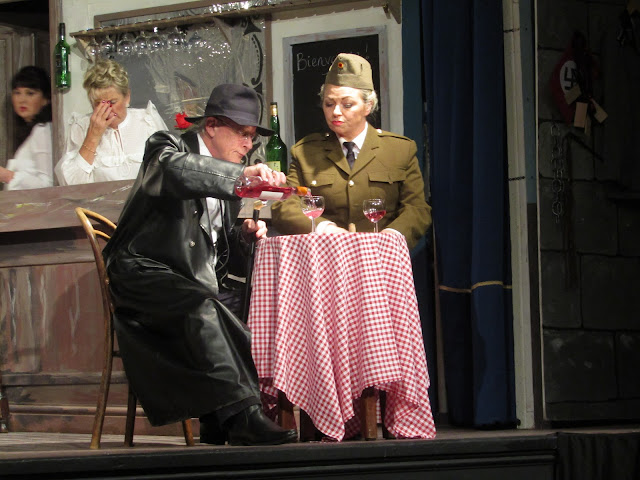 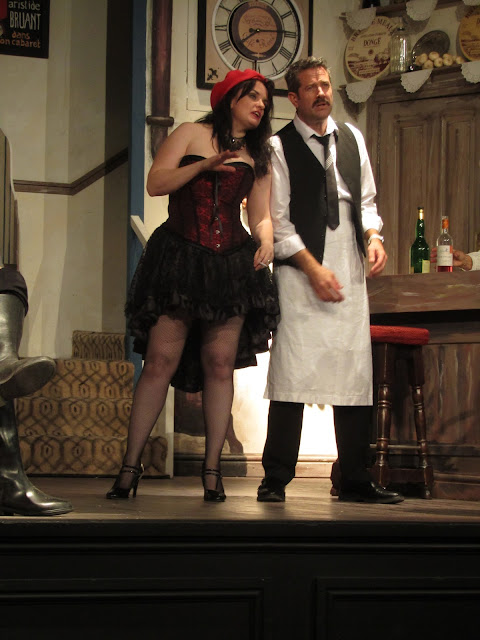 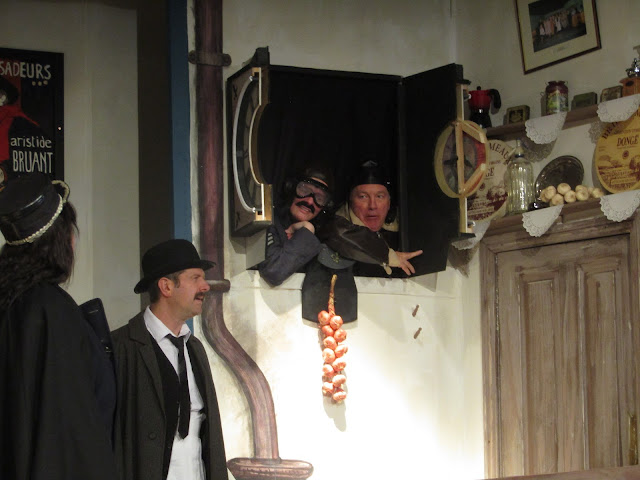 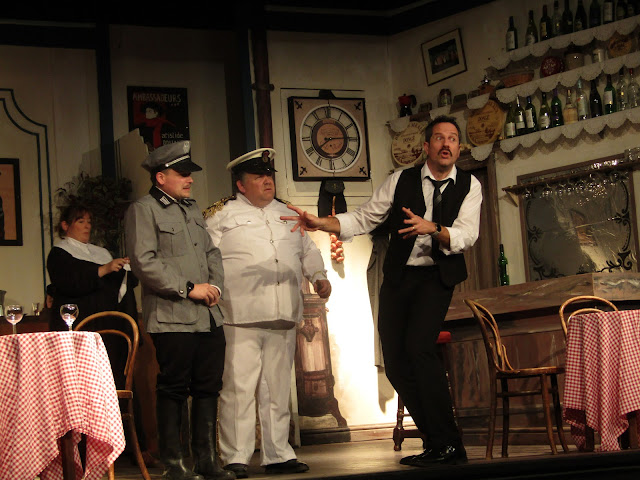 * Confusion reigns until the end.

Llangollen Twenty Club are this week taking to the Town Hall stage with their version of the TV comedy classic ‘Allo ‘Allo.

And listen carefully as I will say this only once ... c’est magnifique!

'Allo 'Allo! is a British sitcom television series created by David Croft and Jeremy Lloyd, starring Gorden Kaye, and originally broadcast on BBC One between 1982 and 1992.

It focuses on the life of a café owner in a town occupied by the Germans during the Second World War.

Rene Artois has to deal with assorted problems caused by a dishonest German officer, a local French Resistance leader, a stolen painting – the famous Fallen Madonna with the Big Boobies - and a pair of trapped British airmen, while concealing from his wife the secret dalliances he is having with his attractive younger waitresses.

The humour is very much in the Carry On style of double entendre but with the added twist of taking the pissoire out of the French way of doing things, at least in line with the old British clichés.

The production, directed with high style by Chrissie Ashworth, was originally planned to be shown in March 2020 but had to be reluctantly put on hold due to the pandemic and now – relearned from scratch - it’s at going live, with all Covid precautions being rigorously followed.

In this ambitious and hilarious two-acter the excellent Nick Hawe takes the pivotal role of Rene and plays him with just the right mixture of world weariness and sardonic humour.

Backing him up brilliantly is Sue Griffiths as his wife Edith whose acting ability is, as the script requires, on a far higher plain than her singing. She’s perfect for the part in every aspect.

The coquettish waitresses who Rene can’t keep his hands off are brilliantly portrayed by Lizzie Clifford (Yvette) and Heather Wolfson (Mimi). .

Michelle the Resistance operative, who brings us that famous “I will say this only once” catchphrase is a way that is thankfully never overdone, is the clearly talented Emily Swindley.

As he is in anything he does with the club, John Clifford is excellent as the bumbling German colonel Von Strohm. He’s shown true dedication to the part by having the top half of his head specially shaved – you’ll soon get why when the action begins.

His gloriously bemedalled Italian sidekick Captain Bertorelli is played with the right measure of narcissism and lasciviousness by John’s son Joe.

The key role of Herr Flick, the cold-blooded and limping Gestapo guy, is in the extremely capable hands of an almost unrecognisable Bill Hughes, while his adoring assistant Helga is brought cheekily to life by Tracey Kempster.

The talent roles on with Ian Wright playing Lieutenant Gruber, the German officer who is a little more thoughtful than usual, and the club’s marvellous Arwel Jarvis taking on the mantle of the strict but quirky General von Schmelling.

Unusually for the Twenty Club, who are usually words only, the cast rounds off with a song and does it very well – look out Operatic!

The show comes in a milestone year for the club as October 21 saw its 75th anniversary.

'Allo 'Allo runs at Llangollen Town Hall from Tuesday-Saturday November 9-13, at 7.30pm, with a Saturday matinee at 2.30 pm.

Bookings can be made through Ticket Source, from Courtyard Bookshop, Jenni’s of Market Street Llangollen, and the Oggie Shop next to the town hall. For telephone enquiries call 01978 869394.

I understand at least one of the night shows is already booked solid, so get a move on if you don’t want to miss this fantastic French farce.

Posted by llanblogger at 7:40 AM