Have your say on constituency boundary changes 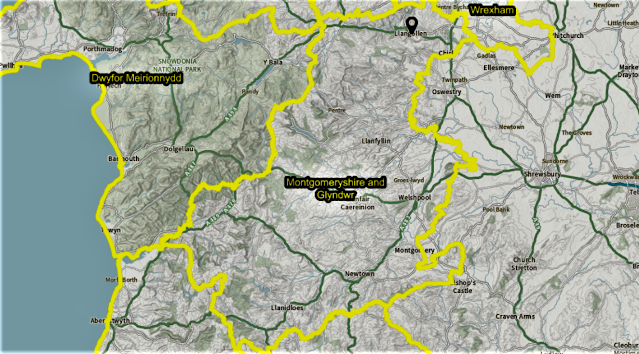 * A map of the proposed new Montgomeryshire and Glyndŵr
constituency, which includes Llangollen.

Electors in Llangollen may soon have to get used to living in Montgomeryshire and Glyndŵr (Maldwyn a Glyndŵr).

That’s because the present Clwyd South is proposed for the axe in a major review of parliamentary constituencies being proposed by the Boundary Commission for Wales (BCW).

And people now have just a couple of days to have their say on the plan as the eight-week consultation period comes to an end this Wednesday.

The shake-up aims to redraw the political map of Wales.

Old constituency names will disappear, such as Clwyd South, Arfon, Vale of Clwyd and Clwyd West.

The proposals from the BCW, published in the summer, follow a decision to reduce the number of Welsh seats in Westminister from 40 to 32.

Under rules set out in the Parliamentary Constituencies Act 1986, each constituency proposed by the Boundary Commission for Wales must contain between 69,724 and 77,062 electors.

Previous Boundary Commission proposals were abandoned because it wasn’t possible to get them through Parliament.

In making its recommendations, the BCW says it considered geography - such as lakes, rivers, and mountains - and current boundaries such as local authority and ward boundaries.

The commission also considered local ties, such as shared history and culture.

If the plan is approved by the UK Parliament, Llangollen will become part of the new Montgomeryshire and Glyndŵr (Maldwyn a Glyndŵr) constituency.

This, says the BCW, would combine the existing Montgomeryshire constituency with wards from Wrexham and Denbighshire.

As well as existing Montgomeryshire wards, the new constituency would have the following wards (electorate size in brackets):

Proposed name: Montgomeryshire and Glyndŵr. The official alternative is Maldwyn a Glyndŵr.

Why? Existing electorates in the Montgomeryshire and Clwyd South constituencies are too small.

The Commission chose to combine the existing Montgomeryshire constituency with an area that effectively forms the southern electoral wards of the former Glyndŵr district council.

During this six-week period, BCW will also hold a limited number of public hearings across Wales, more details of which will be made available closer to the time, it says.

After analysing all the responses from the first and second consultations, the commission will make appropriate changes to its initial proposals and publish these revised proposals for a final four-week period of public consultation in late 2022.

After analysing all the responses to the third consultation, BCW will make appropriate changes to its revised proposals, and submit the final report and recommendations by July 1, 2023.

* Full details of the boundary proposals can be found at: https://www.bcw-reviews.org.uk/node/6468?postcode=LL208EQ

Before the closing date of November 3, the public can send their views on the proposals to an online consultation portal at bcw-reviews.org.uk, which features the proposals in full.