Looking back on the life of Wyn the local legend 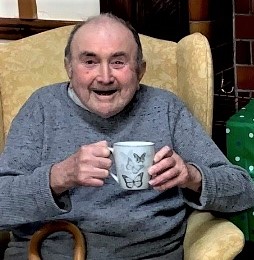 * Wyn Hughes pictured a few years ago at the Abbey Dingle.

News broke yesterday that a Llangollen man known as a local legend had died at the age of 86.

A few years ago Paula Lingard wrote a profile piece telling the story of Wyn Hughes - affectionately known as Wyn Paraffin - in the Dee Valley News.

Here, with her permission, we reproduce it:

Wyn Hughes, Legend of Llangollen, is a modest, kind-hearted gentleman, who is always the first person to hold open a door for you, it makes no difference if you are a local, or a visitor to the town. He always has time to stop for a chat, usually about football, or an update as to the whereabouts of your nearest and dearest! He’s a creature of habit and loved by all who know him.

Born on 19th January 1934 to Elizabeth and Joseph Wyn Hughes, Wyn jokes about whether he was born in hospital or arrived by parachute. Typical of Wyn to crack a joke and make light of everything, and reminded me it was the year of the Gresford Disaster. He lived at 4 Bank Top, (now the car park, behind what was the Smithfield pub) until the row of houses was declared derelict and he moved into Hall Street with his mum and dad in 1936. He recalls a story about Jesse Owens, who won four gold medals in the Berlin Olympics in the same year, as if it was yesterday.

An only child, Wyn attended the local school, which is now home to Ectarc. He pestered his father to let him join him at R. M.& Sons Ironmongers. Unfortunately, they couldn’t take on any extra staff. He did, however accompany his father on his many trips to the head office in Sandbach. He left school at the Easter break in 1949, leaving school on Thursday and starting work on the following Monday. His mother worked in the local laundry, where Kenrick Motors are now situated.

He began work as a labourer in the Mile End on the A5, as a metal worker on a hand press. In 1962, he was made redundant and took on two part-time jobs; as a Postman at Christmas, and brushing the sheep’s mess off the golf course. Play never stopped and he had a few near misses!

In 1965, he began work in the old silico works, bagging. He remained there until 1985, when he was made redundant. For the next two years he worked for Glyndwr Council, and began his quest to keep the streets of Llangollen clean and tidy. Unfortunately, due to health issues with his legs, he had to give this up.

‘If only I had Betty Grable's legs and Fred Astaire’s feet', he announced.

I couldn’t resist asking Wyn about the women in his life. He mentioned a name or two, (I dare not repeat).‘I had my chance once or twice, and I enjoyed it when the Liverpool girls stayed at Plas Geraint’.

He recalls playing football for the youth club, which is now home to Bensons, but says he spent most of his time on the line. To this day Wyn supports our local football teams, always cheering them on with a smile. Often recalling iconic moments and names of players in sport, he has an amazing memory and always has a story to tell. I asked him how long he had supported Spurs and was taken aback with his answer. I’ve never supported them, I support Llan, it’s just something I’ve always said’.

Wyn told me of the time he was grounded in 1964. ‘It was a Sunday night and my mam and dad had gone to the RAFA club for a game of bingo. I told them I wasn’t going out, but decided to go for a walk around the block. Tony Daniels came up in his car and asked me to go to Oswestry with him and some others. Hell no, I told him, I’ve got work in the morning. Anyway, we went over the border to the Boar’s Head. After a while, they said they were going to the toilet. I waited and waited, butt hey never came back. I walked all the way home from Oswestry. I was grounded for the next five or six Sundays’.

For many years Wyn would pop from one shop to another to see if anyone needed any messages or errands running. Always putting others first. One very wet morning in June this year he was caught on camera sweeping the rain water away from the paths and down the drains, again thinking of others before himself.

I’ve had a fair few cups of tea lately with Wyn and fully understand why he wouldn’t take up the offer of being part of the annual Eisteddfod Parade. ‘I’ll come out in a cold sweat. I’ll stand in the same spot as I do every year, by the bollards near the Hand at the bottom of Oak Street.’ There’s quite a shy person hidden underneath all the banter and friendly face that he portrays to the world.