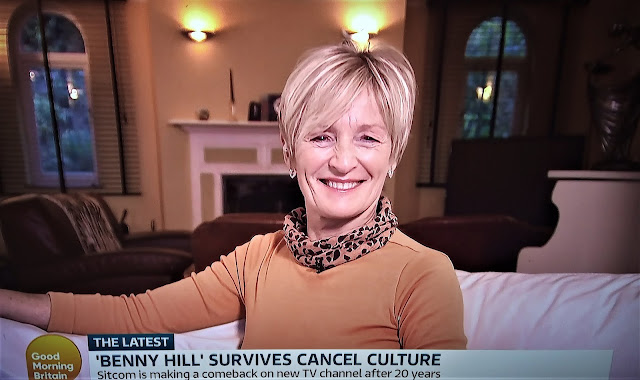 An actress and dancer from Llangollen has appeared on national TV to describe how she feels about repeats of the famous Benny Hill Show in which she starred being scheduled for a return to the small screen after an absence of over 30 years.

Despite being one of Britain’s most popular programmes the show was pulled by TV bosses in 1989 when they became worried about Hill’s slapstick character chasing scantily-clad young women from the group named Hill’s Angels through various risque routines.

But now a series of re-runs forms part of the festive schedule on Freeview channel That's TV Gold, renamed That's TV Christmas for the season.

* Julie (above) debates the return of the show with Debbie Arnold interposed with a scene from the show.

* Benny Hill's show was pulled by TV bosses in 1989 after years of success.

Julie Kirk Thomas, who runs a series of popular dance classes in Llangollen, appeared as one of the Angels in a number of the original episodes and went on ITV’s Good Morning Britain this morning to give her reaction to the show’s comeback.

The interview, conducted by presenters Adil Ray and Suzanne Reid, became a good-natured debate about the relevance of the show to today’s audiences between Julie and Debbie Arnold, a contemporary performer who refused an offer to appear in the Benny Hill Show back in the day.

She said: “I turned it down because I thought it was terrible. The show was just awful and so sexist.

“I know that the girls loved doing it but it was so, so dated. It was written by men for men and not for women.”

But Julie put up a stout defence of the programme, saying: “The targets of Benny’s humour were often the men in the show.

“It should be seen again because it was known all over the world. He didn’t swear and never used bad language.

“Charlie Chaplin had a shelf full of Benny Hill films in his office. Benny was one of the greats and should be shown again.

“People  in care homes and with dementia love to see old things because it brings back memories for them.

“I agree that we’ve moved on – but what have we moved on to?”

After her TV days Julie went on to appear in a number of hit films.

Apart from running her dance classes at Llangollen Town Hall, in recent years she has performed with Llangollen Operatic Society and other stage groups such as the Collen Players.

Posted by llanblogger at 8:37 AM