The aim of this two-year project is to investigate the nature of young people's beliefs, in Europe. 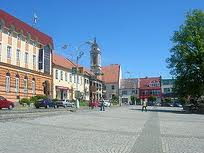 It will involve a number of mini-projects and tasks, coupled with visits by both teachers and students.


The first event at the school will be the launch of the logo competition, so that the overall project, its final book and its website will have a logo that represents its theme.


The initial visit was to the Czech Republic, where, in Uhersky Brod, teachers and students had a programme of meetings and events, culminating in their participation in a candlelit procession and a folklore evening.


Each country will take two teachers and three students to each meeting, the next of which will be in Estonia, in March 2013, followed by Sardinia, in April.


Wales will host in May 2013 and the project will end in Germany - the project co-ordining country -  in 2014, where there will be a big festival to mark its conclusion.


Peter Williams, the school’s international co-ordinator, said: “We are hoping that the project will help our students to look more closely at what they believe, themselves, as well as the society around them.
“We are hoping, equally, that they will be able to broaden both their cultural and linguistic experiences, as all student visits are homestay ones.”
Posted by llanblogger at 9:00 AM