LLANGOLLEN Railway played its part in remembering the war dead at the weekend.


On Saturday and Sunday, it ran a series of Poppy Special trains, each hauled by a vintage steam locomotive and proudly wearing its own large poppy on the front of the engine.


The service departed Llangollen Station at 11am, 1pm and 3pm on both days for a period of quiet reflection.


Visitors over the weekend also had the chance to find out about the LMS Patriot Group’s new steam engine, The Unknown Warrior, currently built in the heritage railway’s own engineering works.


Adopted by The Royal British Legion, the aim is to have it ready to steam into London on November 11, 2018 to mark the 100th anniversary of the end of the First World War.


The Poppy Specials were pulled by loco number 3802, a Great Western heavy freight engine dating from 1938, which was restored at Llangollen a few years ago for a group based in Plymouth and is now back there to delight steam enthusiasts.


Members of Llangollen’s army cadet contingent sold poppies aboard the train and on the platform and attrated good support from passengers.

Among visitors on Sunday were a family from Perth in Western Australia who landed early at Heathrow and drove straight up to Llangollen to see a steam train. 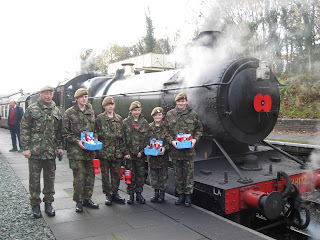 * Army cadets with the Poppy train.

* A short video film of the departure of the first Poppy Special of the day on Saturday can be viewed at http://www.youtube.com/watch?v=SVvpKK4RoZg
Posted by llanblogger at 7:01 PM