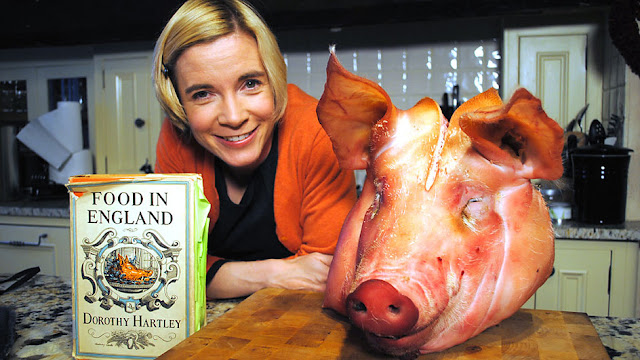 * Presenter Lucy Worsley with one of Dorothy Hartley's recipes involving a pig's head.

One of Britain’s most fascinating food writers – who once lived in nearby Fron - went under the spotlight in a new BBC 4 television show.

Food in England: The Lost World of Dorothy Hartley, which was screened at 9pm last night (Tuesday), was written and presented by historian Lucy Worsley.

It told the fascinating story of Dorothy Hartley who was born in 1893.

Her father was the headmaster of a boys' school in Skipton, and her mother, who taught music, was from Fron where the family owned quarries and property.

In 1933 Miss Hartley moved to Fron House where she lived for the rest of her life.[2]

She spent the 1930s as a roving reporter on rural Britain, capturing a disappearing world of country ways.

She had a weekly column in the Daily Sketch newspaper for which she hunted out recipes, customs and folklore.

Travelling by car, bicycle or on foot, she was so dedicated to her task that she would sometimes sleep in a hedge, relying on her skill of lighting a fire to boil tea within 20 minutes whatever the weather.

She saw off would-be suitors with talk of Viking burial customs, and had a life-long habit of signing letters "D Hartley (Miss)", to draw attention to her single status.

Miss Hartley wrote up decades of her research in her great work on the nation's stomach, Food in England.

Published in 1954, it became an instant classic that's never been out of print.

"Overheard in Wigan market" is a not uncommon source for a recipe.

Her concern was forever the food of ordinary people, not the rich.

As she writes in her introduction to Food in England: "Our old big house has been divided and let, and I have lived for 20 years in a workman's cottage, with a gas-stove in one room and a log fire and pot crane in the other, and cooked – as convenient – on each. It's been a happy time."


Following the death of her niece and the subsequent owner of the family house in 2004 and 2010, Dorothy Hartley's archive came to light.


Roger Mansbridge was responsible for dealing with her papers, documents and various archives, and releasing the archives has resulted in a biography-in-the-making of Miss Hartley, the TV programme and the book, 'Lost England 1933 -36.’


Mr Mansbridge said: “This programme had been in the making for around 12 months and there is a book to accompany it.


“Although Miss Hartley died in 1985, her most famous book Food in England has never been out of print - she published many books in her lifetime.”
• Lost World, a collection of Hartley's journalism, is published by Prospect Books.
Posted by llanblogger at 9:27 AM