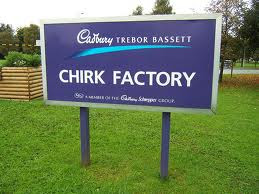 Clwyd South Assembly Member Ken Skates as called on the new owners of the Cadbury factory in Chirk to outline its plans for the plant.
Following the recent de-merger of Kraft foods, the Cadbury trademark and products have now become part of a new company - Mondelez International.
This includes the Chirk factory which currently produces cocoa and hot chocolate products for the company and which employs around 150 people, quite a number of whom are from Llangollen.
The AM called on the company to make a ‘long-term commitment’ to the plant.
He said: “The Cadbury factory in Chirk is a vital source of skilled employment for people in the town and must be protected. The original takeover by Kraft in 2010 was the source of inevitable anxiety for everyone who worked at Cadbury and together with even more structural change now, there is again uncertainty about what this might mean for plants such as the one in Chirk.
“Two hundred positions have been cut at Cadbury across the UK in the last year and factory workers are no longer protected by a pledge of no compulsory redundancies which expired in March.
“In addition to this Kraft went back on a pledge not to close the Cadbury plant at Somerdale near Bristol. Therefore I think it is only fair that the new company set out its long-term plans for the brand, including the future of the Chirk factory.
“I want to see the Welsh Government work with Cadbury so that the plant in Chirk is seen as an attractive place to invest. In return I’d like to see a major, long-term commitment by the company to protect and invest further in the site.
“Food manufacturing is a growing industry and the UK market share for Cadbury is also growing. Add in the fact that the European market is a big one for the new Mondelez company, accounting for nearly 40% of sales, and you quickly come to see that there is no reason why the factory in Chirk cannot have a bright and exciting future.”
Kraft went ahead with a surprise demerger in October which saw more than 100 of its snack brands, including Cadbury, Milka, Toblerone and Oreo, put under the new company Mondelez International.
Posted by llanblogger at 8:38 AM