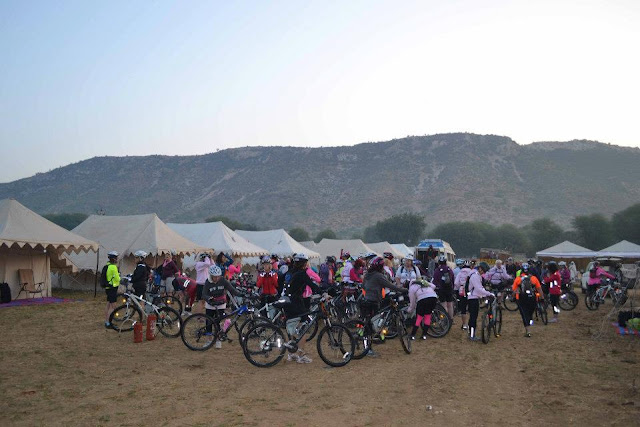 * The cyclists get ready for another hot day in the saddle.
SOARING temperatures and stomach problems mean Louisa Jones of Llangollen Operatic has just had her toughest day yet riding through India on a marathon charity challenge.

Louisa is taking part in a marathon 220-mile trek through the sub-continent as part of the Action for Charity’s Women V Cancer Cycle Challenge to raise cash for three women’s cancer charities.


She is one of around 90 other intrepid women cyclists from across the UK riding over pothole-strewn roads in 30 degree heat from the city of Agra – home of the iconic Taj Mahal - through the rural state of Rajasthan in north-west India to the capital, Jaipur. 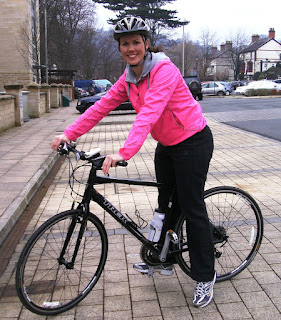 Louisa (pictured right) is sending back daily reports to keep llanblogger readers updated on her progress.
In her latest report, covering day four of her amazing journey, she says: "I had thought that day 2 and 3 would be the hardest but today has been the most challenging for me personally due to the very high temperature and a touch of the old 'Dehli belly', which has been spreading around our camp.

"Thankfully, we have two doctors travelling with us who have treated those with the worst symptoms plus other ailments, ensuring everyone has cycled the majority of the way each day.
"We set off early again and climbed high up into a beautiful and mountainous area, stopping in an ancient ruined city, supposedly haunted, where we walked for a while and watched monkeys playing.

"After lunch was particularly tough as the heat soared to 34 degrees and by the time we reached our next stop off point in a town, some off us were really feeling it.

"After a refreshsing cup of chai, we walked around the local market, attracting a lot of attention from locals clearly unused to groups of Western tourists. After buying saris and locally made jewellry we set off again and finally arrived at our camp for our last night under canvas.

"Tomorrow we cycle the final 40km in the morning. I can't believe it is nearly over."
Posted by llanblogger at 5:46 PM