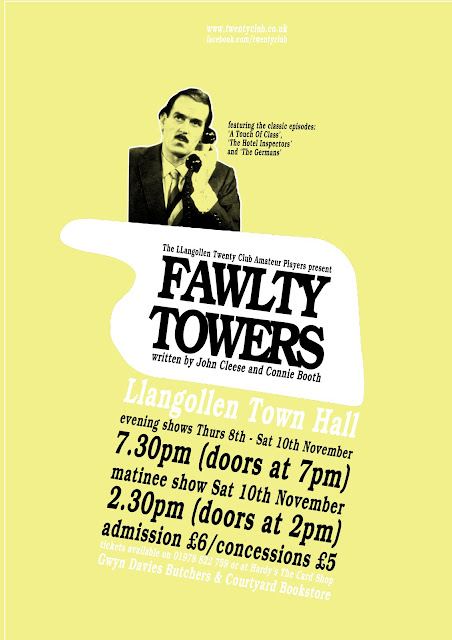 THEY made only a dozen episodes back in the mid-seventies but Fawlty Towers rapidly grabbed a place in the TV hall of fame as possibly the funniest show ever to come out of Britain.


And Llangollen Twenty Club’s interpretation of this comedy icon is also likely to go down in local history as one of its best ever productions.
Those lucky enough to have seen it at the Town Hall – there wasn’t a ticket to be had for the sell-out Friday and Saturday performances but a few seats were available for the rare Saturday matinee – will testify to just how hilarious it was.
But then they could hardly go wrong when the man taking the lead role of Basil Fawlty was the very personification of the lanky lunatic who runs the county’s most dysfunctional hotel with his bone-idle and domineering wife Sybil.
Despite his tender years,  Ally Goodman has already impressed in a number of Twenty Club productions but Fawlty is surely his finest hour to date.
Not only did he look uncannily like the super-rude and outrageously ham-fisted mine host but he also captured his manic mannerisms and sardonic speech patterns to a tee.
He shone in the first two parts of this three-episode homage to the great show, The Hotel Inspectors and A Touch of Class, but positively – and quite literally - burst into flames in the final act based on that unforgettable episode when a group of Germans come to stay at the Newquay hotel and Basil, still reeling from the concussion he sustained from a runaway extinguisher when a blaze breaks out in the kitchen but determined not to mention the war, unintentionally fires off a salvo of Nazi-related insults as he takes their lunch orders.
Every offensive phrase gets him deeper in the mire, from his “Eva Braun cocktail” to his “hors d’oevres must be obeyed”.
But in the end it’s his unabashed goose-stepping Hitler impersonation which brings the medics dashing into the hotel to cart him back to hospital where he belongs.
If no decent Fawlty Towers interpretation could function without a brilliant Basil then it must also have a marvellous Manuel – the bumbling waiter from Barcelona of whom his vicious boss says it would have been easier to train a monkey.
Here fate  and some great casting provided the Twenty Club with another delicious dead ringer in the shape of  Richard Mascarenhas
From his hangdog look and droopy moustache to his baggy trousers and duck-like walk he was every inch the hapless Spaniard who is tortured almost as much by the vaguries of the English language as the insults and slaps of Fawlty.
Manuel would have dominated every scene he was in if his overbearing nemesis Basil hadn’t been on stage at the same time to give him a real run for his comedic money.
Fawlty’s wife Sybil is such a little baggage that she ought to be able to keep her monstrous husband in check but not even her own insufferability is enough and, in fact, only serves to make him even worse.
Portraying all this with suitable nuance is quite a task but one Twenty Club first-timer Helen Belton was perfectly up to.  She was understated yet still formidable in the role.
The rest of the cast shone too, from Bill Large as the drunken buffoon Major Gowen to Anna Turner as Polly the maid who is possibly the only completely sane member of the hotel’s surreal staff  team.
In all there were about 20 of them on stage at various times and  where they were and what they were supposed to be doing at any given moment in the madhouse that was Fawlty Towers was a herculean logistical task which director Chrissie Ashworth managed as competently as any wartime general.
Sorry, I forgot, don’t mention the war!
Posted by llanblogger at 6:55 PM