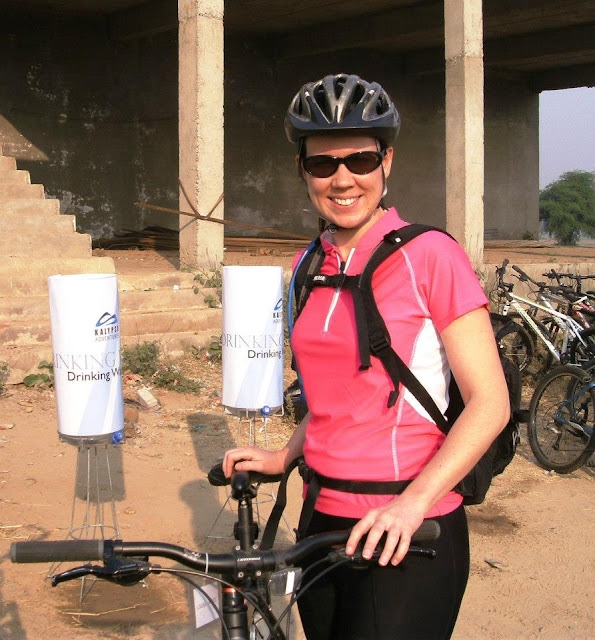 * Louisa Jones with the bike which took her 260 miles across India. 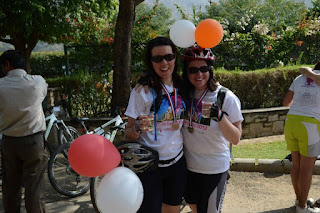 * Louisa, left, celebrates with a fellow cyclist
at the end of their gruelling ride. 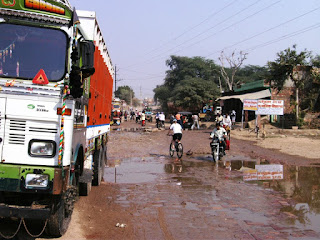 * The muddy roads the cyclists had to negotiate. 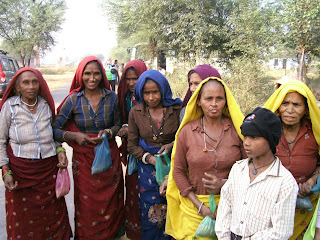 A Llangollen Operatic Society member says taking part in a 260-mile charity ride through India has given her the sort of insight into the country that a tourist trip never could.

Louisa Jones, 33, was shocked by some of the extreme poverty she saw along the way but amazed at how people with absolutely nothing still managed to keep smiling through their miserable circumstances.

She returned at the weekend from her gruelling nine-day trek through north-western India as part of the Action for Charity’s Women V Cancer Cycle Challenge to raise cash for three women’s cancer causes.

Along the way Louisa, who works as a European sales analyst for the Ruabon-based Flint Group printing and packing company, had to contend with pothole-strewn roads and soaring temperatures sometimes over 30 degrees.

She and around 100 other women from across the UK who took on the challenge set out from the city of Agra – home of the iconic Taj Mahal - and pedalled through the rural state of Rajasthan, ending their momentous journey in the capital, Jaipur.


To maintain their tight schedule the intrepid cyclists, ranging in age from their twenties to their sixties, needed to average around 40 miles a day.
Their route was far removed from the usual tourist trails and went both on and off road.
Louisa told how at one stage along the road she had been catapulted over the handlebars of her bike after being cut up by a jeep and ended up with a huge and painful bruise on her side.

Later in the trip, she and many of her fellow cyclists were hit by the dreaded “Delhi belly”.

Eventually reaching Jaipur, the group celebrated their achievement with champagne.

Back home, she said: “It was an unbelievable experience and I’m still not sure I have been all the way to India and seen all that.

“I saw things you don’t witness as a tourist.

“Out in the rural areas there was poverty with people literally living in mud huts but the things we rode past on the way into Jaipur at the end of the trip will live with me for ever.

“We went in through the slums and it was just mind-blowing – just a sea of rubbish and in that rubbish there were cows, pigs and dogs.

“There was also children playing in all the filth, some wearing next to nothing.

“There were also people’s dwellings amongst all the rubbish.

“Despite their incredible circumstances it was amazing to see that people were still happy and  smiling at us as we cycled past.”

Louisa, who is also a regular lead performer with Llangollen Operatic Society, added: “I was also amazed by the women on the ride.

“I was amongst the youngest of the group. The oldest lady was 65 and the average age was around 42.

“Many have had or were still recovering from cancer or getting over other personal challenges.

“Everyone had a story but no one wallowed in it and the support and camerarderie shown was  humbling.”

In advance of her trip to the sub-continent Louisa raised the cash necessary to guarantee her a place on the ride.

Thanks to strong support from family, friends and work colleagues she managed to burst through the £2,800 qualifying barrier some months ago and pledges are still coming in.

She also made a personal contribution of £500 towards her fundraising total, which will be distributed between Breast Cancer Care, Jo’ Cervical Cancer Trust and Ovarian Cancer Action.

She said: “I will personally have raised about £3,300 for the three charities and I am told that the three groups, including my own, which recently completed the ride have raised a total of £900,000.

“I also hear that this has provided half the annual budget for Ovarian Cancer Action, so I think it was all well worthwhile.”