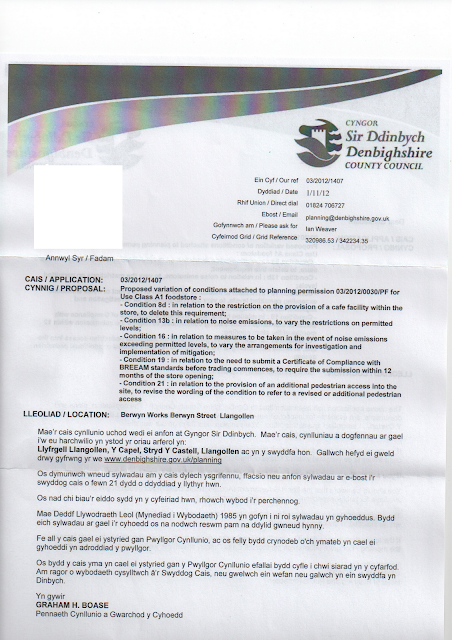 * The letter outlining the latest application.
Agents for the developers are seeking permission from the county council to alter conditions imposed on the plan to build a new Sainsbury’s supermarket close to the centre of Llangollen.

Among other things, the fresh application, submitted last week, aims to remove the restriction covering a café inside the new store.
But the move has angered campaigners against the original scheme who are urging people in the area to object to it.
An online petition has also been launched asking the council to reject the latest proposals.
Despite local objections, the plan to build the new 20,000 square foot store, which applicants claim will create 109 jobs, was approved by Denbighshire’s planning committee in September.
It will occupy the site of the Dobson & Crowther printworks on the A5, with the factory transferring to a new location at nearby Climedw.
At the planning committee meeting, Llangollen councillor Cllr Rhys Hughes proposed a list of conditions, among which was one not to include a café facility.
These conditions were accepted by members before they voted to grant the application.
Now, WYG Planning & Design, acting on behalf of applications J Ross, has submitted a new application seeking to vary a number of the conditions, including the one referring to the café.
Mike Edwards, chair of the group Keep Llangollen Special (KLS), which campaigned against the supermarket plan, said: “KLS are appalled by this application being put in so quickly when the certificate granting approval of the original applications was only just issued.
“In our view it is totally detrimental to all the existing independently owned cafes, coffee shops and hotels in Llangollen.
“We are discussing it at our next management committee meeting on Monday, but will be strongly opposing approval of these relaxations.
“We wish everyone in Llangollen to be aware of these revisions and urge them to object to the applications.”
A separate anti-supermarket campaign group, Llangollen Preservation, is also objecting to the latest application and has launched a petition, which can be viewed at: http://www.ipetitions.com/petition/save-llangollen-high-street/
A spokesman for the group said: “As of a letter received on Saturday, Denbighshire Local Planning Authority have put out to public consultation - for 21 days – a proposal to release Sainsbury’s from a number of conditions, including overturning the cafe restriction.
“It is a fact the new superstores only succeed if they steal market share from their rivals – usually the most vulnerable, like small, independent traders.”
The precise terms of the new application are:
·         Proposed Variation Of Conditions Attached To Planning Permission 03/2012/0030/Pf For Use Class A1 Foodstore .- Condition 8D . In Relation To The Restriction On The Provision Of A Cafe Facility Within The Store, To Delete This Requirement.- Condition 13B . In Relation To Noise Emissions, To Vary The Restrictions On Permitted Levels.- Condition 16 . In Relation To Measures To Be Taken In The Event Of Noise Emissions Exceeding Permitted Levels, To Vary The Arrangements For Investigation And Implementation Of  Mitigation.- Condition 19 . In Relation To The Need To Submit  A Certificate Of Compliance With Breeam Standards Before Trading Commences, To Require The Submission Within 12 Months Of The Store Opening.- Condition 21 . In Relation To The Provision  Of  An Additional Pedestrian Access Into The Site, To Revise The Wording Of The Condition To Refer To A Revised Or Additional Pedestrian Access.
It can be viewed online at: http://planning.denbighshire.gov.uk/lg/GFPlanningDocuments.page
Posted by llanblogger at 7:57 AM