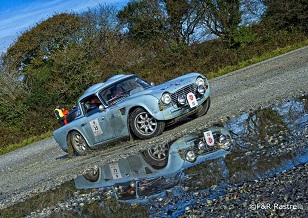 
Le Jog 2012, the 18th Land's End to John O'Groats Reliability & Touring Trial, which takes place between December 1 and 4, has been described as the toughest event of its kind in Europe.
That is because of the severe weather drivers taking part often encounter along the route.
Organised by HERO – Historic Endurance Rallying Organisation – Le Jog is once again open to cars built before 1984 and attracts entries from across Europe.


The Touring Trial is a non-competitive but challenging event aimed at testing the stamina of the crew.
Calling at the reliability trial main controls and with 'code board' questions between controls, there are no time penalties, regularities or tests.
Entrants receive finisher’s awards and are eligible for the concourse and Spirit of the Rally awards.
2012 Le Jog will break new ground with the route using roads and parts of the country that have never been used before on the event.
Among two new stop-off points will be Llangollen.
After setting off from Land’s End early on Saturday morning, the route takes a direct line to the Severn Bridge before heading to South Wales and heading up through the country to Llangollen where the drivers will have an overnight halt.


After bed and breakfast the route will travel through Cheshire and Lancashire.
The final 24 hours will begin with a run through the remoter areas of Northumbria and the Borders.
In the afternoon the crews will drive west then north-west to skirt Glasgow and head via the famous Rest-and-Be-Thankful hill climb for an evening supper halt at Fort William.
Leg five will see them driving through the Highlands to arrive at John O'Groats for the traditional piper's welcome and breakfast before turning back south for the short drive to Wick for a deep sleep in preparation for the celebrations of the black-tie prize-giving dinner.
Posted by llanblogger at 8:18 AM