Whiteout ... then a blackout for Llan

We understand that residents in some parts of town only had their power restored at around 6pm today (Saturday). At one point, some residents also temporarily lost their water supply.
+ TV signals continued to be disrupted by the snow. On satellite systems they can be caused by snow blocking the receiver dish. 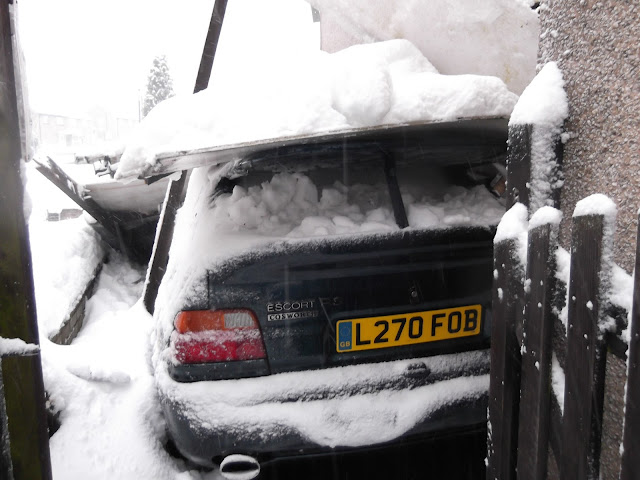 * Not a pleasant picture this one. It came in from Mrs Mary Rogers, who said: "This was the disaster we woke up to in Pengwern this morning. The weight of snow caused the
carport to rip off wall right on top of my son's Cosworth. PS: the pedestrians on Regent St this morning were myself and my husband out to get a loaf. 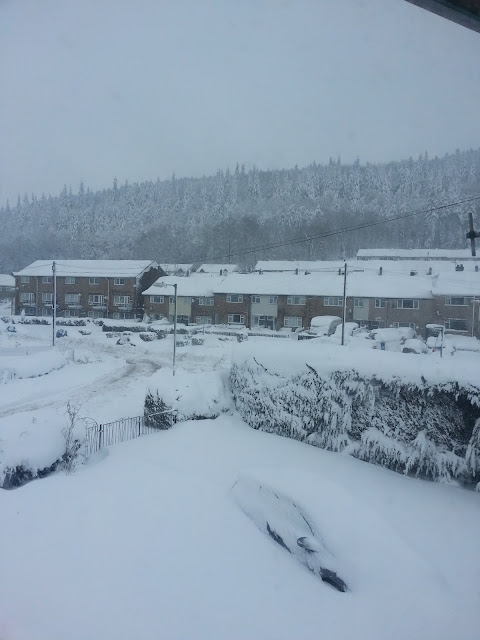 * Top of Pengwern from Ged Manley. 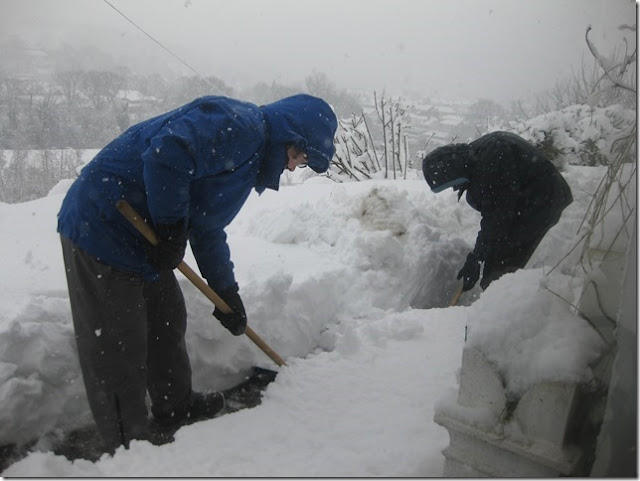 * Jude Williams has just sent us this one in captioned "Trench digging on the Geraint".
Thanks Jude!
* An almost deserted Castle Street this morning.


Llangollen people awoke this morning (Saturday) to find even more snow … and no power.


And llanblogger is only now able to bring you a report it because the electricity supply to our property near the centre of town was only restored at 1.20pm.


The BBC is reporting on its North East Wales website that 6,000 homes in Llan and the Dee Valley generally were subjected to a power cut because of continuing heavy snow.


The problem in is Llan is believed to have been caused by a break in power lines perhaps caused by a falling tree.
(Right top: Whiteout at the station and, below, pedestrians walk in the roadway in Regent Street).


Some residents were reporting that they heard a loud bang from somewhere in the area at around 3am on Saturday accompanied by a blue flash which lit up the entire sky.


The blackout crippled the town centre, with many shops remaining closed because they had no electricity to power lights or computerised tills.


Amongst the few shops which remained open were Gwyn’s the butchers, Gerrards bakery, Lee’s newsagents and the greengrocers opposite.


The chemist shop in Regent Street was also providing a limited service for prescriptions.


Later in the morning the Co-op in Regent Street opened but queues formed outside when a limit was placed on the number of customers allowed in the darkened shop.


Snow, sometimes heavy, continued to fall thoughout the morning. Added to accumulations from the previous day this led to treacherous conditions underfoot.


Many pavements in and around the town centre have disappeared under large banks of snow over a foot deep in places.


A limited volume of traffic along the A5 was reduced to a crawl during the morning as pedestrians took to the carriageway rather than risk negotiating the untreated pavements.


Many people remain blocked into their own driveways with their cars buried under deep snow.


Electricity companies say repairs to the supply network was being hampered by the conditions and road closures.


Scottish Power said it managed to reconnect a number of properties on Friday which had lost power, only to receive a new batch of faults on Saturday.


Turning much colder overnight, a widespread frost is likely and ice could also cause a few problems.


The A5 west of Llangollen in the direction of Corwen remains closed due to fallen trees and the Horseshoe Pass is closed for the usual safety reasons.


If you have snow or power cut stories or pictures, send them us at llanblogger@gmail.com and we’ll share them with our readers.
Posted by llanblogger at 2:21 PM