From today (Monday) officers from North Wales Police will team up with their counterparts from forces across the country to mount a seat belt campaign.

They aim is to be warn motorists and passengers they are risking their lives by not wearing belts and issuing fixed penalty notices to those flouting the law. 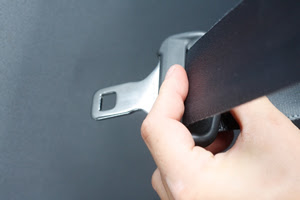 Law breakers risk a £60 Fixed Penalty Notice or being summonsed to court where they could face fines of up to £500.

Inspector Martin Best from the North Wales force’s Roads Policing Unit said: “Wearing a seatbelt can mean the difference between life and death – failing to wear a seatbelt is still apparent on the roads of North Wales and it is disappointing to see that people are still choosing to risk their lives and the lives of others.
“We have a robust strategy around enforcing the Fatal 5 offences which are failing to wear a seat belt, drink and drug driving, dangerous and careless driving including unnecessary risk taking, speeding and using a mobile phone while driving.

“We are committed to assisting in reducing casualties on the road through the use of targeted enforcement operations around high risk groups of people and locations while enforcing the Fatal 5 offences.

“The risk of being seriously injured or killed rises dramatically if a decision is taken to commit a Fatal 5 offence and I want people to be aware of the devastating affect it can have and make a conscious decision not to take any chances.”
He added: “Seatbelts are vital to the safety of you and your passengers and we will continue to take a pro-active approach all year round to educate motorists and enforce seatbelt laws.”

Supporting the campaign this year is Lesley Parry, who tragically lost her son Dewi following a road traffic collision on an unclassified road near Rhosgoch on Anglesey last summer.

The 17-year-old, who was from Llanbabo near Amlwch, was pronounced dead at the scene following the one-vehicle collision which happened on 9th June 2012.

“I wholeheartedly support this campaign and I urge everybody out there to always wear their seatbelt. The effect of Dewi’s death on us as a family and on many of his friends has been devastating. This can happen to anyone, please make sure you belt up.”
Inspector Best added: “Our aim is to save lives and prevent another family such as the Parrys having to deal with the aftermath of a collision in which someone is not wearing a seatbelt.”
Posted by llanblogger at 7:46 AM