An Assembly Member claims he has been told by care home professionals that closing a community hospital could lead to earlier deaths.

Llangollen Hospital closed on Friday  March 8.  The picture below shows the padlocked door. 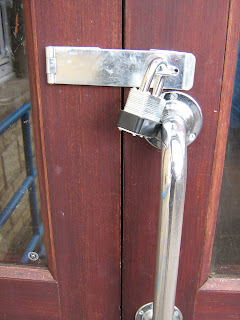 The call comes after Mr Gruffydd questioned the First Minister in the Senedd this week about the closure.

He revealed new research that the health board has closed Llangollen Hospital’s 18 beds without securing promised replacement services and without even forming a business plan to support their decision.
Mr Gruffydd said: “We were told that the hospital would be replaced by a new community health centre, enhanced home care and beds would be available in both Chirk Hospital and local private nursing homes.
“Now that the closure has happened and how much of those alternatives are in place? Here are the facts:
"The new community health centre – there is no business plan in place, there is no building secured and it will take at least three years to get the consultation, planning and building done, assuming the promised £5.5m is still available then.
"Home Enhanced Care Service involves more nursing and clinical staff working in the community. This is uncosted and there is no additional budget for this. An insider has told me that there are no staff in place currently and that the y are having trouble recruiting staff for the HECS.”
Research carried out by Mr Gruffydd shows that during most of 2011 and 2012 Chirk hospital was at 98% capacity with no room to take the patients that would usually have gone to Llangollen Hospital.

Information obtained through Freedom of Information also shows that Llangollen Hospital was serving at an average of 95% capacity during the same period.
He added that his office had spoken to three local nursing homes and all had explained that nobody from the health board had contacted them at all about this proposal.

He added: “The care homes made it clear they have no spare capacity and, because they are regulated by a different body than the NHS, would feel very uncomfortable about taking NHS patients needing in-patient care.
“It appears the health board has sold its vision of improved healthcare on a series of empty promises. It is a shameful betrayal of the entire Dee Valley, which has been well served by this cottage hospital for 137 years.

"More and more patients from this area will face having to go to Wrexham Maelor, where there are already problems with ambulances backed up outside A&E due to bed blocking. This will only make things worse.”
Mr Gruffydd said professionals at some of the care homes had expressed concern to  him about the proposals.

He claimed one care home professional, who wants to remain anonymous, said that he believed closing cottage hospitals would lead to earlier deaths.
According to Mr Gruffydd, the insider said: “Cottage hospitals are great. Many elderly residents resist going to a General Hospital because they are afraid of hospital related illnesses.

"I’m afraid that closing the cottage hospital will contribute to people’s deaths earlier. If there isn’t a cottage hospital then elderly patients will have to be moved around more which is also a very traumatic experience.”
Another said: “We have only received one phone call to see if we might be available for a meeting. We have got serious concerns. We’re all in the dark. Our registration is governed by the CSSIW (Care & Social Services Inspectorate Wales), and we might need to change that to accommodate NHS patients.

"Our training is geared around elderly care not palliative care. We had a phone call asking if we could take a medical patient not so long ago and we had to refuse because we didn’t have the expertise. This should have all been sorted out 3 or 4 months ago.”
Llyr Gruffydd said: “During the consultation period the Health Board received numerous representations from various professional bodies including the BMA and Local Authorities saying that there wasn’t enough detail, effectively that they hadn’t provided a business plan. Indeed this was also the complaint of the Community Health Council. I

"It is now painfully obvious that they in fact didn’t even have the basics of a business plan. What they had was a vague idea of what they hoped would be an alternative, but didn’t do any homework to see if it was achievable.

"The hospital at Llangollen has been closed for a week, and they are still in the process of gathering basic information, and haven’t even held talks with those that they expect will deliver their services. It’s scandalous.”
CASE STUDY
Councillor Rhys Hughes, of Llangollen, has confirmed that an elderly man had to go to Mold community hospital from Llangollen last week because of the sudden closure of the local hospital.

He said: “Normally he would have been an in-patient in Llangollen but, because the hospital was closed without warning, he was sent to Mold. There were no spare beds at the time in Chirk.
“Is this going to be a regular occurrence?
“This is adding to the trauma facing patients, who naturally want to be as close to family and friends as possible, and the closure without any adequate replacement is going to cause long-term problems for our community.”


Plans for establishing a new primary care resource centre are progressing well.  An option on the site has been secured and a design team led by an architect have been appointed by the Health Board who have held an initial meeting with the Denbighshire County Council Planning Department and are liaising with Highways with a view to submitting a full planning application in June.  The business case will be submitted to the Welsh Government after planning consent is received and construction costs are established.
2. Enhanced home care.
Funding for the roll out of the enhanced care at home service in the Llangollen area was identified by the Health Board prior to the recent public consultation and discussions with the GP practices and out of hours services regarding the provision of medical support are progressing.  The intent is that these discussions will be concluded i n time by the end of May for the service to commence in early June.  Four of the nursing staff who were previously based at Llangollen Community Hospital who wished to transfer to the enhanced care at home service are now training in interim posts in readiness to join the already established wider community nursing and therapy teams.
3. Beds at private nursing homes.
In relation to the proposal to establish links with a local nursing home to which patients who require palliative care could be admitted, we are currently writing an operational  policy and admission criteria for discussion with the nursing home concerned who have indicated their willingness to hold these discussions.
4. Beds at Chirk Hospital.
Since Llangollen Community Hospital was closed on the 8th March we have encountered no issues with patients from Llangollen requiring admission to Chirk Hospital and there are currently no patients from Llangollen waiting for a bed at Chirk Hospital.  Prior to this we were unable to offer an inpatient bed at either Chirk or Llangollen Hospitals to a patient who was then admitted to Mold but this patient has now been transferred to Chirk Hospital and is continuing their recovery there.
Posted by llanblogger at 3:24 PM